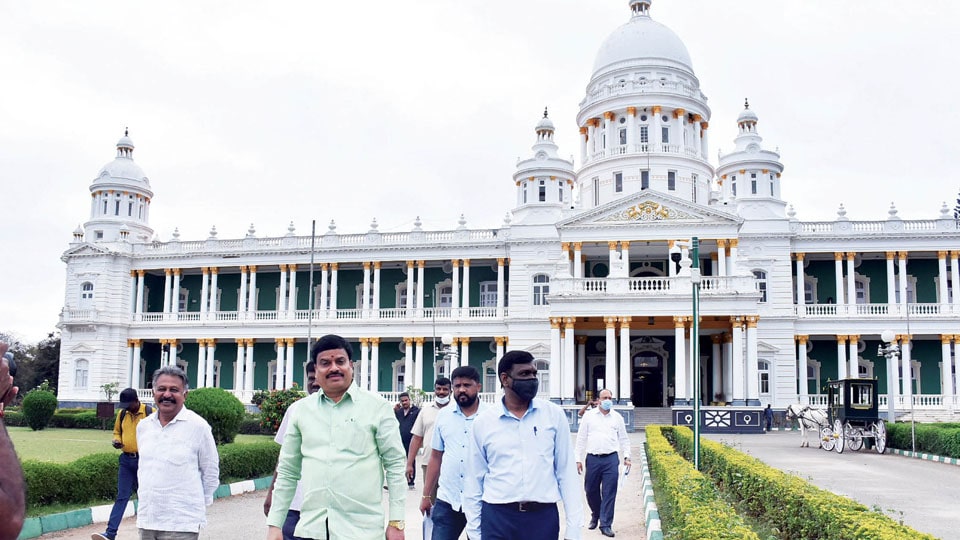 Lalitha Mahal Palace Hotel is in the news again. The Chairman of Jungle Lodges and Resorts (JLR), in his news briefing, wanted to have a Centenary celebration of the building which was commissioned in 1921 by our then Maharaja for the stay of Viceroy  which  never materialised. Excellent news.

There is a lot of confusion on the land size of the Palace. I had got the land officially measured by a professional and it was about 40 acres and 24 guntas. Apart from this, the State Government in its wisdom had transferred some land to the Tourism Department around this property. Originally there was a mango orchard which was a part of this property but since there was water shortage from inception, the orchard was transferred to the Horticulture Department.

Even during my tenure in the Hotel, a landshark from Bengaluru had tried to occupy some land opposite the Hotel claiming that it was sold to him by the Maharaja but we got him evicted by proving that the land belonged to the Hotel.

This magnificent building would have been another one of the heritage buildings which would gone down the drain but for the vision of one Sundara, a Mysurean, who was the Chairman of the itdc in the seventies. He realised that this building could be converted to a magnificent heritage hotel and he somehow convinced the State Government to hand over the building to itdc, which appointed one H.N. Murthy as the Project Manager for this conversion work.  They also appointed Rajinder Kumar Associates, the topmost hotel architect of that period, as the architect for this project.

In the seventies, no one had any experience of renovating a heritage building unlike the present   time when there are hundreds of heritage hotels all around.

The building was in shambles and in poor condition. The building had to be completely water-proofed. The full garden had to be relaid. A major problem that time was the shortage of water and thus a new 3 inch line was laid from Vani Vilas Pump to the water sump at the entrance of the hotel at a cost of Rs. 3 lakh for exclusive use of the hotel. Due to the shortage of water, the step garden was also not redone.

But meanwhile Siddartha Layout came into existence. Due to local demands, the water meant for the hotel was diverted to the Layouts. Social justice.

Another problem faced by Murthy was the colour of the walls. The original paint of dark olive green was imported  and  was not available  then.  Nowadays one can get any colour since machines do the mixing and matching  but in the seventies there was no such facility. Murthy then contacted the management of Asian  Paints. They sent a team to collect  the sample of the colour. They  managed to match the  colour and supplied about 400 litres of colour paint to the hotel for  the purpose of repainting the front of the hotel with that particular olive green colour.

End of 74, the heritage hotel opened up for business and for about 6 years it was a white elephant making losses year after year. The reason was simple. A 24-room hotel with  different size rooms can never make money. Groups shunned the hotel since  one  could not offer  same  kind of rooms for all the members.  Then itdc with the approval of the State Government built 30  modern rooms  and a pool  in 80s  in such a way that it was not visible from the front. Once this modern rooms  were built, group movement started and this hotel became  an international  star.

READ ALSO  Please do this first... then think of MRC

The lift, an original Otis built wooden carriage could not be commissioned during the inauguration. But luckily in my tenure, the grandson of Otis was coming on a visit to Mysore. I contacted the  chief of Otis and told him about our problem. He immediately despatched his top engineers and got the lift commissioned before the arrival of the chief guest, who was thrilled to see his company antique  lift in operation!

Since itdc itself was on the disinvestment list, the management  decided to hand over the building back to the Karnataka Government  and did so in 2018, though the lease  period was  upto 2023. The Government in its wisdom asked JLR to take care of the property. This was supposed to be a temporary phase  and a tender was supposed to be put out for leasing this property to ensure that  this “jewel in the crown”  was  maintained in its full glory.  JLR runs Jungle Lodges and they  do not have the expertise or experience of managing heritage property.

Lalitha Mahal Palace Hotel is a  deluxe heritage  hotel and the statement of the Chairman that he wants to convert this hotel to a “people’s hotel” is ominous. Another heritage hotel at Hyderabad, the Taj Faluknama, charge Rs. 4,000 for just a visit. Why? The reason is simple. If too many visitors  visit a heritage property, there is a chance of  a damage. That is the reason the top heritage properties like Udaipur Palace Hotel etc.,  charge a lot to maintain their snob value. I do hope that the State Government calls the tender  for  leasing out this property  at the earliest  to some international chain. Otherwise this property, a jewel in the crown of Mysuru, shall become another basket case  like our Lansdowne or Devaraja Market over a period of time.