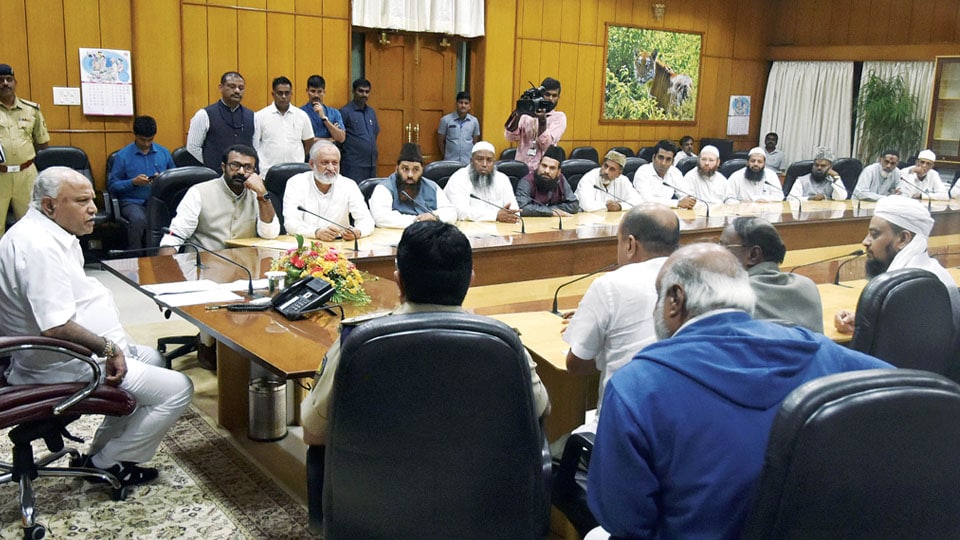 Meeting Muslim community leaders, including MLA N.A. Harris in Bengaluru last evening, the Chief Minister requested them to cooperate with the Government in maintaining law and order. He made a fervent appeal to give a call for withdrawal of ongoing protests. Muslim leaders assured they’d do their best to control the protests.

“I appeal to the minority Muslim brothers, this law will not affect them in any way. It is our responsibility to protect your interest. Please cooperate, maintain peace and order,” he said.

He said, “Citizenship Amendment Act (CAA) is no threat to the people of this country. It’s only an Act applied to people from other countries who seek citizenship. CAA does not discriminate people on the basis of religion. Citizenship is accorded on the basis of nationality.” He claimed that opposition parties and leaders opposing it are doing it with a political motive.

“CAA is a Constitutional provision. There’s no question of States rejecting it,” he said.

Mysuru remained largely peaceful this morning a day after a large number of people protested on Ashoka Road and in front of City Police Commissioner’s Office against the Citizenship Amendment Act and the ban orders imposed by the Police to curb demonstrations.

The ban orders will be in force till the tomorrow (Dec. 21) midnight and the city has been taken over by Police and reserve forces to prevent any breakdown in law and order. Permission to hold protests and rallies have been denied.

At a press conference held in city this morning, Mysuru-Kodagu MP Pratap Simha blamed former Minister and current Mangaluru MLA U.T. Khader for breakdown of law and order in Mangaluru that resulted in the death of two protesters Jaleel Kudroli (49) and Nausheen Bengre (23), at Nellikayi Beedhi last evening in Police firing.

“Just three days back Khader had fuelled passions by saying Karnataka will burn if Citizenship Amendment Act (CAA)is implemented in Karnataka. The MLA, without properly understanding the Act, instigated violence and miscreants had hatched a planned conspiracy to disturb peace in Mangaluru and other parts of the State,” Simha alleged.

The CAA has been misread, misunderstood and misinterpreted by Congress and Left parties and they are provoking people to get violent. The Act is not against Muslims and only grants citizenship to religious persecuted minorities from Muslim nations like Pakistan, Bangladesh and Afghanistan. “The Act in no way targets Indian Muslims and vested interests in Congress and other parties are fanning violence to divide the Nation,” Simha alleged.

“The BJP-led Government is committed to taking action against those who will try to create disturbances in society. It is inevitable for the Police to take strict action against such persons,” he said.

Traders, shopkeepers voluntarily shut their shops and business establishments in Napoklu, Siddapura, Nellihudikeri, Yemmemadu and Kottamudi in Kodagu this morning against the Police firing in Mangaluru where two persons were killed. They alleged that the Police opened fire on a peaceful protest. Traders demanded immediate compensation for the families of victims.

The Government published an advertisement in newspapers to dispel the myths around the CAA and the National Register of Citizens (NRC). It said that “the NRC has not been announced yet and if it is done so in future, then rules and regulations should be such that no Indian citizen is troubled.”

A fact-check of the NRC released unofficially by the Government and circulated on WhatsApp said that the process was “merely a normal process to register your name in the Citizens’ register.” “Just like we present our identity cards or any other document for registering our names in the voter list or getting Aadhaar card made, similar documents shall need to be provided for NRC, as and when it is carried out,” the unsigned note said.