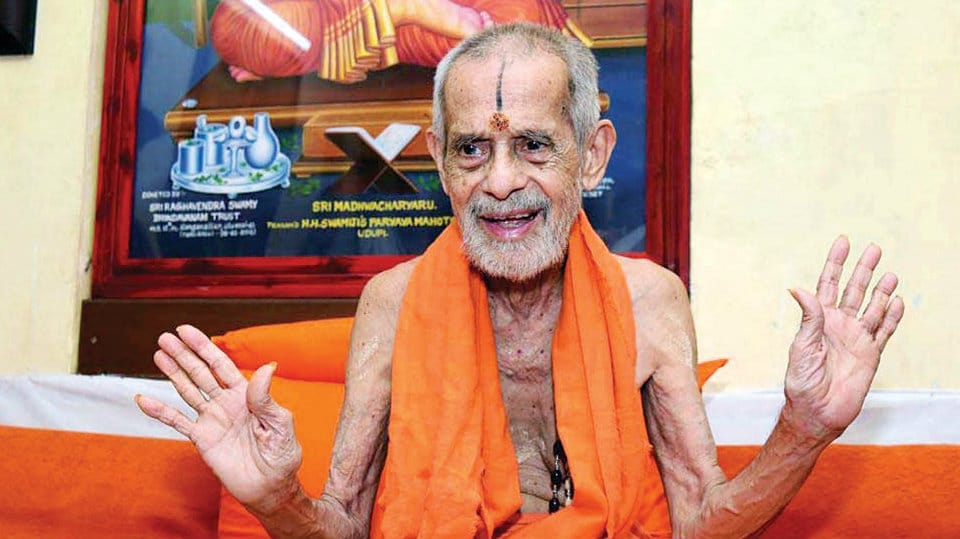 Mangaluru:  Vishwesha Theertha Swamiji of Pejawar Mutt was admitted to the Kasturba Hospital in Manipal early this morning after he complained of difficulty in breathing and he is currently serious and is connected to a ventilator.

In a press release issued today, the Medical Superintendent of Kasturba Hospital said that the 88-year-old Seer was brought to Kasturba Hospital in Manipal with complaints of difficulty in breathing since 5 am today from a private hospital.

“He is currently serious and connected to a ventilator. He is being treated for extensive pneumonia with antibiotics and supportive treatment. Any further updates on his health status will be notified,” the release said.

Meanwhile, Raghuram Acharya, Dewan of Pejawar Mutt, said that the Seer woke up at 2 am and was doing his routine duties. He complained of difficulty in breathing at around 3 am and later he was rushed to the hospital. He had fever yesterday. “The doctors have said that they have given medicines and there is improvement in his condition. But he is on a ventilator,” he said.

Meanwhile, Kota Srinivas Poojary, Minister for Ports and Fisheries, and Muzrai, visited the Kasturba Hospital to enquire about the health of the Seer who was receiving treatment at the Intensive Care Unit and spoke to the doctors treating him. Chief Minister B.S. Yediyurappa will visit the Kasturba Hospital in Manipal at 4 pm tomorrow to enquire about Pejawar Seer’s health, said a press release.