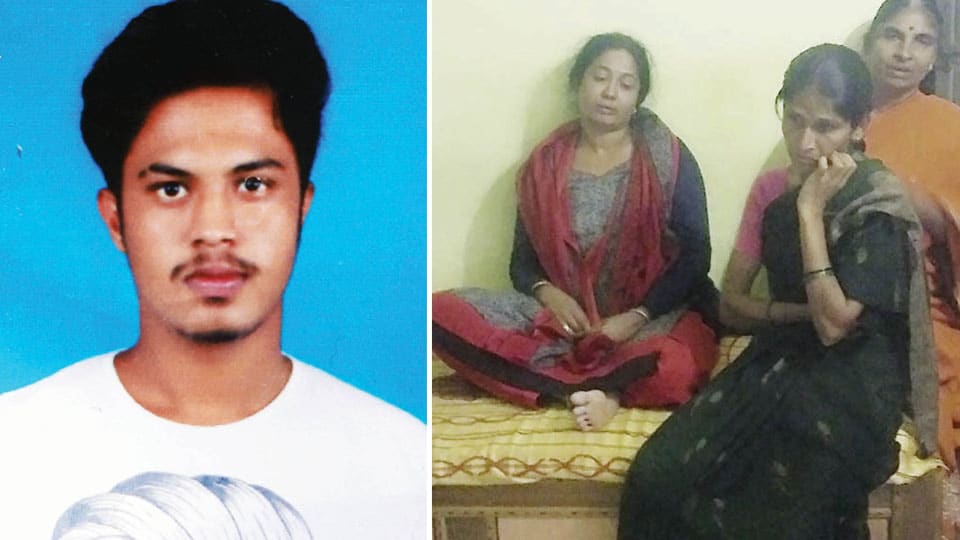 Periyapatna: A youth from Periyapatna working in Malaysia has drowned in a river in Malaysia and the family that stays at Convent Road in Periyapatna is desperate for information. They have reached out to Mysuru-Kodagu MP Pratap Simha for help.

Twenty-two-year-old Sumanth is the youth who was declared missing by Malaysian authorities. He is the son of Shobha-Venkatesh couple. He had gone to Malaysia to earn some money to support his family. The family depends on agriculture and Sumanth’s mother is a tailor.

Sumanth secured a diploma and managed to secure a job in Malaysia through a job network agency nine months back. His job was in a goods ship in that country. The family got information that Sumanth drowned in a river near Batang Lebaan on Dec. 15.

As per the information available to the family, Sumanth drowned in the river and his body has been fished out in a decomposed state. Though the face features cannot be matched with his photos, Malaysian authorities have confirmed that the dead body fished out from the river is that of Sumanth. DNA tests have to be conducted to establish his identity.

The family wants Sumanth’s body and is desperate for any information about Sumanth and they have reached out to MP Pratap Simha for help.

The Indian High Commission in Malaysia has been contacted through the MP’s good offices and the parents are waiting for information.

Parents said that they had paid Rs. 4.5 lakh to the agent for Sumanth to get the job in Malaysia. They alleged that the agency that had assured the family that Sumanth’s interests on foreign soil will be safeguarded was not responding to their desperate pleas.

They point out that sometime back, a youth from Maharashtra too had died under mysterious circumstances and he too died working in a ship.

The family members said that though Sumanth died on Dec. 15, the incident was informed to them on Dec. 17. Sumanth was working in Bengaluru and with an intention to earn more money he went to Malaysia along with           a few friends.

Salary not paid for three months

The agency had assured a monthly salary of Rs. 70,000 but when Sumanth joined the work, he was paid only Rs. 18,000. Sumanth was not paid salary for three months, alleged Hemanth, Sumanth’s brother. The family said that the news of Sumanth’s death was conveyed by his friend and he told them that Sumanth had died of drowning.

Hemanth alleged that after the drowning incident, Sumanth’s friends have been questioned by Malaysian Police and they have been kept in separate places. “Something is fishy. I appeal to the Central and State Governments to urge the Malaysian Government to investigate and also help us secure my brother’s body,” he said.

Sumanth was working on a sand dredging boat

According to local newspapers and websites in Malaysia, Sumanth’s body was found at the river along Kampung Tebaang, Daro. According to the State Fire and Rescue Department (Bomba), the body was found by members of the public near a sand barge at  2.45 pm on Dec.18.

The Bomba operations centre despatched a team from the Daro Fire Station to retrieve the body upon receiving the alert. Sumanth was working on a sand dredging boat when he was reported missing along Batang Lebaan early Sunday (Dec 15) morning. According to his colleagues, the sailor was last seen on the boat on Saturday night at 10 pm, a local newspaper reported. He was found not on-board at 7 am the next day.

Bomba launched its search and rescue operations after receiving a missing person’s report from the Captain of the vessel the victim Sumanth was working on.