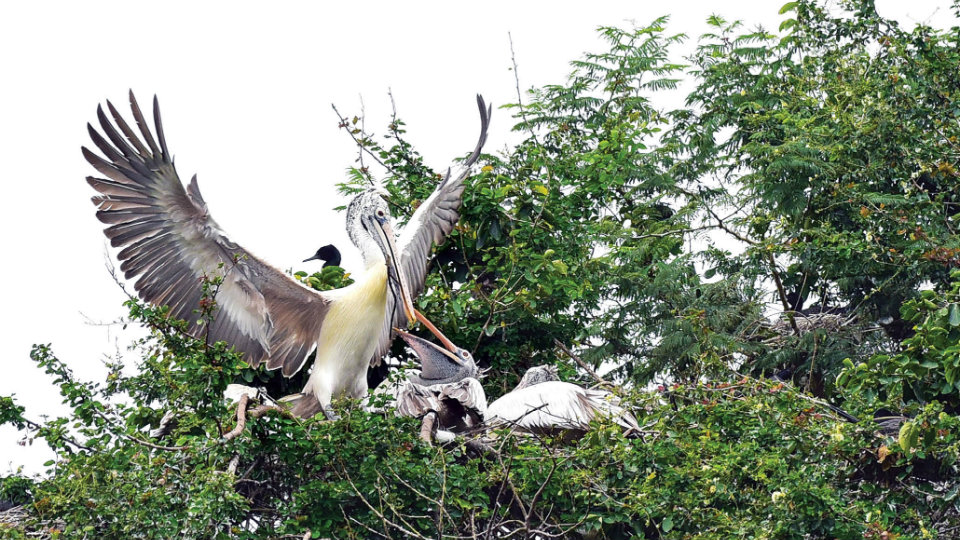 Winter has set in and different varieties of birds have slowly started arriving at the famed Ranganathittu Bird Sanctuary in Srirangapatna taluk, Mandya district, for breeding.

The Ranganathittu Bird Sanctuary is one of the most popular tourist spots in the State and is rated as among the best in the country. This season is also considered to be one of the best to view the birds. The bird sanctuary, spread over 23 islands, attracts thousands of migratory birds (more than 200 species), including the rarest of the rare birds every year.

Usually the breeding season starts in November and goes up to the end of January or mid-February when the winged beauties will fly back as summer season sets in Mysuru. Forest Department officials manning the Bird Sanctuary told Star of Mysore that birds have come from Sri Lanka, Bharatpur in Rajasthan and Mandagadde in Shivamogga.

Pairs of Open Bill Storks, Ibis, Stone Bill, Grey Heron, Spoon Billed Storks, Painted Storks, Spot-Billed Pelicans and River Terns have arrived and are nesting on trees of their choice. Officials said that the migration of birds has just begun where large number of birds from different parts of the country is set to arrive by the end of December. The sanctuary will house more than 5,000 birds by the end of January, they added.

Less in number this year

However, this year, the birds have not arrived in large numbers and there are various factors for this. By December first week, the sanctuary, with 23 islands, would be crowded with more than 200 pairs of birds. This year there are less than 30 pairs that are roosting now.

One of the reasons for the less number of birds arriving at the sanctuary could be the presence of plastic around the islands. When more than one lakh cusecs of water was released from the Krishna Raja Sagar (KRS) Dam last year and this October, many islands were destroyed.

After the water receded, in order to prevent soil erosion, the Forest Department used plastic sheets and sand bags as boundaries and tied the plastic around the sand bags. During earlier years, the Department would fill the damaged portion of the islands with stones and mud. This year, they have chosen plastic and this could be a reason for the birds not to roost on the islands, say bird experts.

Earlier, during the migratory season, the Forest Department would deploy monkey catchers to catch the simians and transport them to different locations. However, the Department has discontinued the practice.

Reacting on the less number of migratory birds, Deputy Conservator of Forests (DCF Wildlife) Alexander said that the winter has just set in and there is a monsoon-like atmosphere in the region with sporadic rains. Also, the backwater in KRS has not receded. Atmospheric temperature and migration timing were closely aligned. There is a sure climate change and birds are sensitive beings and can sense any small change in the climate. May be this is the reason why the arrivals are late. We are hoping to see more pairs in the coming days,” he said.

On the use of plastic and monkey menace on the islands, Alexander said that putting plastic sheets was a temporary measure. “We will rebuild the islands and restore them to the original glory. Regarding monkeys, we will discuss the issue with higher officials and take necessary steps to prevent monkeys from disturbing the birds,” he added.

There is a popular myth that many species of birds that arrive at the sanctuary are from different countries. It is not true, say local guides. Most of the birds are from neighbouring States which gather in such numbers only to breed. After breeding season, they are either solitary or live in small groups.