Mysuru/Mandya: How often do you see children playing cricket in a canal that supplies water to thousands of hectares of fertile land? Some children were found playing inside the Visvesvaraya Canal (Chikkadevaraya Canal) at Achappanakoppalu near Srirangapatna yesterday, reminding us of a grim situation that we are in where Karnataka is staring at a drought for the third consecutive year.

Lack of rain along the Cauvery basin has left canals dry and all hopes of farmers in Mandya and Mysuru rest on the all-party meeting that has been called to discuss Cauvery issue in Bengaluru on Aug. 14. The agrarian community is hoping that they would get water at least to drink and feed their livestock though they have launched a series of protests for water to their kharif crops.

The Visvesvaraya Canal is the main source of Cauvery water to Mandya and Pandavapura. This year, the canal has stood completely dry and water was not released even once. Water was released to this canal only twice or thrice last year and in 2015.

Water level at the Krishna Raja Sagar (KRS) Dam has failed to touch the 100 ft. mark and today’s level stands at 92.55 ft while it was 97.43 feet in the corresponding day, last year. The inflow stood at 10,239 cusecs this morning while the outflow was recorded at 6,087 cusecs.

The present storage level in KRS stands at 16.16 tmcft (thousand million cubic feet) and the reservoir had collected 20.68 tmcft last year. The farmers’ grouse is that water is being continuously released to Tamil Nadu from KRS and Kabini while not a drop is being released to farmers in Mandya and Mysuru. 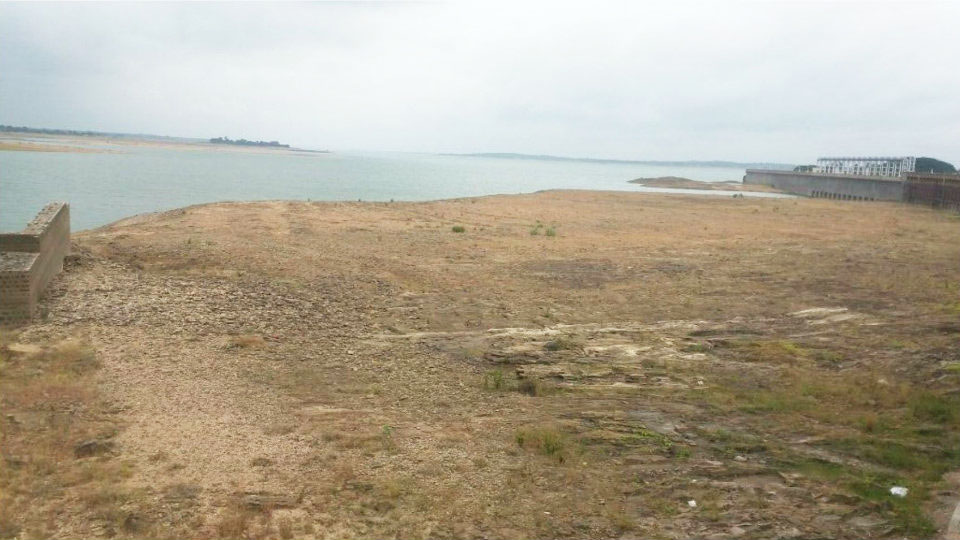 Last year, the Cauvery Irrigation Consultative Committee meeting was held on June 30 and water flowed into Visvesvaraya canal in July. For the water to be supplied to the canals for the kharif crop, 30 tmcft of water is required and with the present storage levels, it is unlikely that water will be released to save the crops. The meeting to be held on Aug. 14 might decide to release water only to drinking purposes.

Meanwhile, in view of the all-party meeting, legislators and MPs of Cauvery basin are holding a preparatory meeting to discuss the issue on August 9, in Mandya. MP C.S. Puttaraju has warned of intensified protests in the district if the Chief Minister fails to take a decision favouring farmers.

READ ALSO  An Aerial View Of Tipu Armoury Being Shifted

Former Chief Minister and BJP leader S.M. Krishna has written to Karnataka Water Resources Minister M.B. Patil yesterday urging him to release 3,000 cusecs of water from KRS Dam to Visvesvaraya Canal immediately. Krishna is believed to have expressed his displeasure over the delay in releasing water into canals.

Successive droughts and a prolonged dry spell this season have left the farmers in the region high and dry, he said and added that 124 farmers in 2015-16, and 74 farmers in 2016-17 had committed suicide due to mounting debts and crop failure.