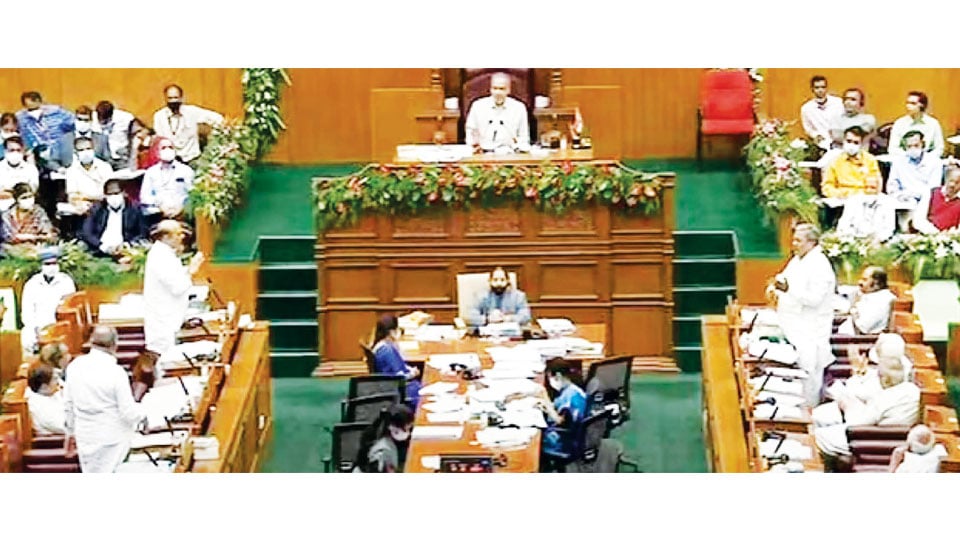 Belagavi: Amid ruckus by the Opposition, Home Minister Araga Jnanendra introduced the Anti-Conversion Bill ­— ‘The Karnataka Protection of Right to Freedom of Religion Bill,  2021’ in the Legislative Assembly at the ongoing winter session of the State Legislature here on Tuesday.

Congress members staged a walkout opposing the introduction of the Bill, despite not being on the agenda on Tuesday.

While the agenda did not mention the Bill, it was added in the supplementary agenda and introduced soon after the House proceedings resumed after lunch which invited the wrath of the Opposition Congress and Janata Dal (S) members.

Even as many Congress members, including Leader of the  Opposition Siddharamaiah and KPCC President D.K. Shivakumar were outside the Assembly, Speaker Vishweshwar Hegde Kageri asked Home Minister Jnanendra to introduce the Bill, which was opposed by Opposition members. Soon, Congress leaders trooped into the hall opposing its introduction.

Highlights of the Bill

• Prohibits conversion from one religion to another by misrepresentation, force, fraud, undue influence, coercion, allurement or marriage.

• Any aggrieved person, parents, brother, sister or any other person related by blood, marriage or adoption or in any form associated or colleague can lodge complaint.

• Person violating provisions in respect of minor, woman, a person of unsound mind, or a person from Scheduled Caste or Scheduled Tribe will face imprisonment ranging from 3 years to 10 years and a fine of not less than Rs. 50,000

• Marriage done for sole purpose of unlawful conversion or vice-versa to be declared void.

• Offence to be non-bailable and cognisable and to be tried by a first class or the Chief Metropolitan Magistrate.

• Person wishing to convert has to declare 30 days in advance before the District Magistrate (Deputy Commissioner).

• After conversion, the person has to intimate the Deputy Commissioner (DC) within one month.

• Inquiry provisions pre and post conversion with regard to genuine intention, purpose and cause of the conversion, if objections are received.

• The departments will take steps with regard to entitlement of person converted to enjoy social status or to receive economic benefits that he was getting prior to conversion.

• The burden of proof lies with the religious converter.