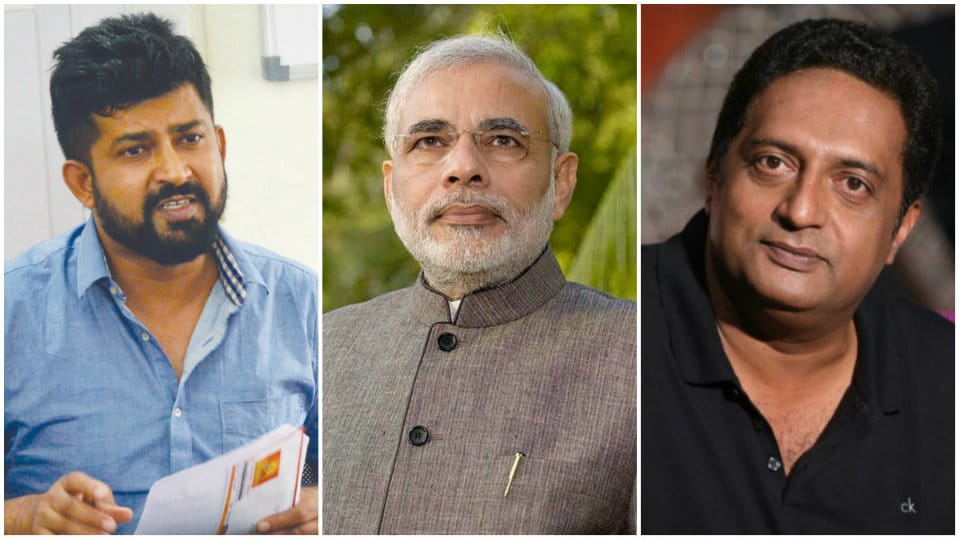 Mysuru: BJP leader and Mysuru-Kodagu MP Pratap Simha came down heavily on noted actor Prakash Rai (Prakash Raj) for questioning Prime Minister Narendra Modi for not reacting to the murder of journalist and activist Gauri Lankesh who was killed in front of her house on Sept. 5.

Responding to the statement of Rai calling Prime Minister Narendra Modi as a ‘bigger actor’ than himself and for remaining silent over Gauri Lankesh’s murder, BJP MP Pratap Simha said: “Prakash Rai is speaking like this because Gauri Lankesh was his friend. Where was he when more than 12 members of pro-Hindu organisations were brutally killed?”

“If Prakash Rai speaks against PM Modi, we will be forced to counter it using his own (Prakash Rai’s) language,” the MP said yesterday speaking to reporters at an event held to accord send-off for Dasara elephants.

Double standards on issues of political murders. Two personal names as an actor: One to please Tamilians, another Kannadigas. No opinion on Cauvery water dispute for fear of displeasing Tamil audience of his films.

It may be mentioned here that Prakash Rai, speaking at the 11th State meet of Democratic Youth Federation of India (DYFI) held in Bengaluru on Oct. 1, had criticised Modi for his silence over the murder of  Gauri Lankesh.

“Gauri’s killers have not been caught yet. But what is more disappointing is that people are celebrating her murder over social media, spreading hatred. Some of these people who celebrated her murder are followers of our Prime Minister on Twitter. We have a PM who shuts his eyes to this,” Rai had said.

Hitting out at Uttar Pradesh Chief Minister Yogi Adityanath, the actor had said on a sarcastic note, “When you look at the kind of statements he (Adityanath) makes, you don’t understand whether he’s a Chief Minister or a priest. He (Adityanath) is a better actor than me. I think I must give out all my five national awards to him.”

Taking umbrage at the actor’s statement, MP Pratap Simha asked Prakash Rai if he celebrated the death of 12 BJP workers. “Why did you not speak out then? Why didn’t you question Karnataka Chief Minister on the law and order situation in Karnataka and that too when it is a State subject,” he questioned.

The MP said, “Actor Prakash Rai in Karnataka becomes Prakash Raj in Tamil Nadu. This reflected his dual mentality and that he has no concern for his mother State. He had  not spoken a word during Cauvery river water sharing dispute. He better be cautious when speaking about leaders like Modi.”

7 COMMENTS ON THIS POST To “Anti-PM views: Pratap Simha hits back at Prakash Rai”