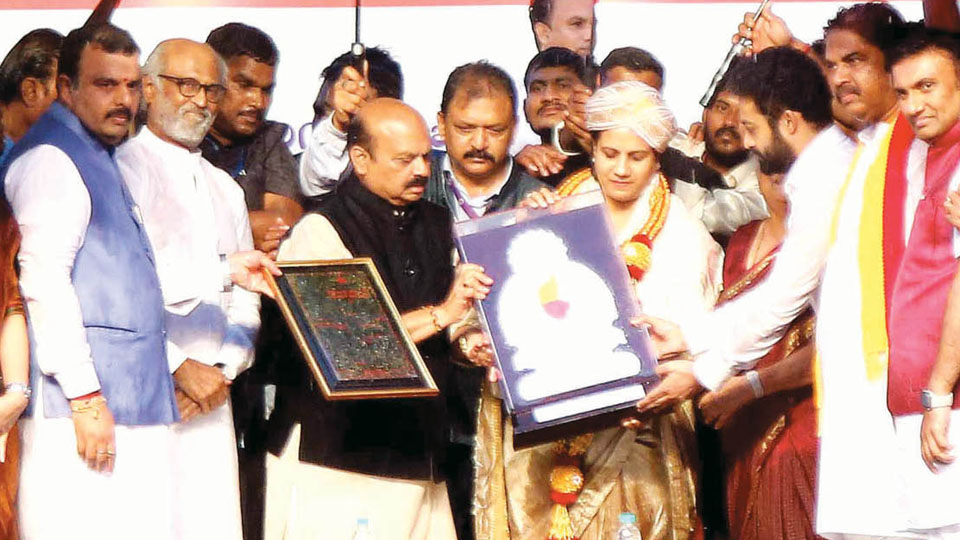 Chief Minister Basavaraj Bommai handed over the award to Puneeth’s wife Ashwini Puneeth Rajkumar at a grand function held on the steps of Vidhana Soudha. The award carries a citation made of Silver and 50 gm Gold. Puneeth became the 9th and youngest recipient of the award and the second from his family. His father thespian Dr. Rajkumar was given the award in 1992 at the grand steps of the  Vidhana Soudha.

Chief Minister Basavaraj Bommai who spoke under the shade of umbrellas, said his Government felt it was a privilege to honour Puneeth Rajkumar. Though the event is being held at Vidhana Soudha, the entire state is celebrating this moment, he added. The CM further said that the rain was a divine blessing, while recalling that it had rained even when Puneeth’s father Dr. Rajkumar had received the award thirty years ago.

Tamil Superstar Rajinikanth, who was one of the guests of honour, spoke in fluent Kannada and recalled his association thespian Dr. Rajkumar’s family. Noting that he first saw Puneeth as a 4-year-old child at Sabarimala in 1979, he said that he can only compare Puneeth to Markandeya and Nachiketha, who left behind a legacy for generations to come. Calling Puneeth as a God’s Son, Rajinikanth said Appu is loved by people not only because of his films, but for his humanity and helping nature. He donated crores of rupees without giving a clue about it to others, he added

Telugu actor Nandamuri Taraka Rama Rao, populary called as Junior NTR, said Puneeth was the ‘Raja’ who won the whole ‘Rajya’ through his humility and smile. Maintaining that the late actor was humanity personified, he said that he was a great human being. He was a real Karnataka Ratna in the true  sense, Junior NTR added.