ARTICULATE FESTIVAL-30: Drowned in the ocean of bliss

Celebrating Indian Classical Dance,  Articulate Festival,  in the 30th of its series, put on platform brilliant Dancers, on the 18th of November 2018, the 3rd Sunday of the month, at Veene Seshanna Bhavana, Kuvempunagar, Mysuru. A presentation of the Articulate Trust for Arts, curated by its Managing Trustee Mysore B. Nagaraj, unfolded a dance tapestry weaved in threads of Kuchipudi, Kathak, Odissi, Mohiniyattam and Bharathnatyam.

His two other chosen repertoire was one on Krishna and the other on Shiva. ‘Nandhakadhara  Nandagopa  Nandana,’ a Sri Annamacharya’s keerathane in Raga Malike and Aadi tala explored two leelas of Sri Krishna, Poothana Moksha and Droupadi Vastrapaharana in the sanchari. The other was on Shiva through the composition “Om Thrinethraaya” in Raaga Malika and Aaadi Tala describing the beauty of his Tandava in the presence of his consort to the accompaniment of musical instruments played by the other two of the trinities and Gods.

With a befitting handsome physic as an instrument of expression moved with such grace, displaying the Coquettish that Kuchipudi dance is. His abhinaya was equally exotic even when transiting from pure devotion, to impishness of Krishna and to the wonder felt by a devote when witnessing the cosmic dance of Shiva.

Kalpana Subbarao from Houston Texas, USA, is the disciple of Guru Sri Sontosh Chatterjee of Kolkata. She is one of the 2018-2019 Artistes in Residence for Dance Source Houston and teaches Kathak for Silambam Houston at their Pearland and Houston Heights locations.

Kalpana presented her two part performance based on Jhap Taal. The first was a seamless performance starting with an ode to Goddess Durga through the hymns written by Sage Vyasa and some picked from the Devi Mahathmeyam of Sri Markandeya, continuing with Natwari Kathak showcasing the Nrutta to the melody refrains in Raga Charukeshi covering the traditional rendition with Aamad, Utthan, Tukda, Paran, Kavitt, Ginti as a Tihai and  Ladi, concluding with a Pt. Birju Maharaj’s Thumri composition “Meri Suno Shyam, Chhado Achharwa” in Raag Miya Ki Malhar. Her second, saw a signature item of Kathak “Tarana” in raag Kirwani.

Her passion for Dance was echoed in her mercurial movements and rhythmic steps embellished with subtle abhinaya, true to the Loka Dharmi narrative technique that Kathak Dance is. 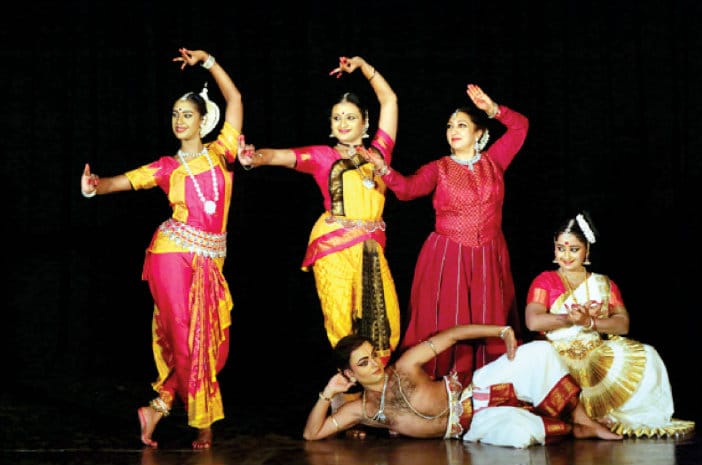 Vivekini Das, disciple of Guru Madhulita Mohapatra of  Nrityantar Academy of Performing Arts, Bengaluru, has a certification of Distinction in Sangeet Visharad Final. A Singapore born, taking residence in India, has pledged to make Odissi dance her breath and life.

The traditional repertoire of Odissi dance, a Pallavi in Raag Malkouns and Ektaali choreographed by Guru Madhulita Mohapatra and a Vallabhacharya’s composition “Madhurashtakam”  on Krishna choreographed by late Guru Pankaj Charan Das, were her choice of presentation for this festival.

Vivekini put her height to great advantage while taking the stances of the sculptursque poses that Odissi dance is so famous for. Her fingers held the perfect mudras, the Bhangimas were so well-defined, the feet shuffled to perfect rhythm and glances that often shot were just divine than being mere sensual. In her abhinaya to Madhurashtakam, she weaved fleeting episodes from Krishna’s childhood times while savoring the beauty of his every limb and his divine acts. From the word go, Vivekini captured the attention that glued till her conclusion.

Dr. Kalamandalam Rachitharavi is disciple of Guru Prof. Kala Leelamma and is a recipient of Ustad Bismillah Khan Yuva Puraskar by the Central Sangeetha Nataka Academy, New Delhi, Ph.D holder in Mohiniyattam and is also a graded artiste of Doordarshan.

Two, highly charged Abhinaya composition, was her selection for the evening concert. The familiar lyrics that are sung in Kathakali was used here in raga malike and aadi tala, to unfold the Poothana Moksham episode was the first and in the second, she poured the feelings of Radha emoting the words of poet Jayadeva as written in his work Geeta Govinda to the Shudhasaranga Raga and Mishrachapu tala.

Dr. Rachitha transported the prekshaka to the times of Krishna Bala Leela. One witnessed a effortless abhinaya that oscillated between the Matru Vatsalaya Bhava and the feeling of commitment to the orders of her King Kamsa during Poothana’s venture to kill the shishu Krishna. The whole enactment was not loud, exaggerated, but so refined and extremely meaningful. Her satwika abhinaya while expressing her feeling for Krishna was very touching and moving.

When compared to this often performed Krithi on Shiva, Manju Nair’s approach to the composition was very unique and deeply involved in the euphoria that the devotee experienced by the sight of the cosmic dance of Shiva. Her excitement was contagious that bound the audience to her spiritual ecstasy.

The welled tear drops floating in her eyes added to the already wonderful performance she gave. Equally interesting was her approach to the Tulasidas Bhajan rendition. Here, as against a devotee, it is Ma Kaushalya’s happiness when she sees the return of Sri Rama to Aayodhya and her reminiscing the childhood and youth times of Rama, that was enacted to perfection, was enchanting.

A evening of dance that drowned the spectators in the ocean of bliss.