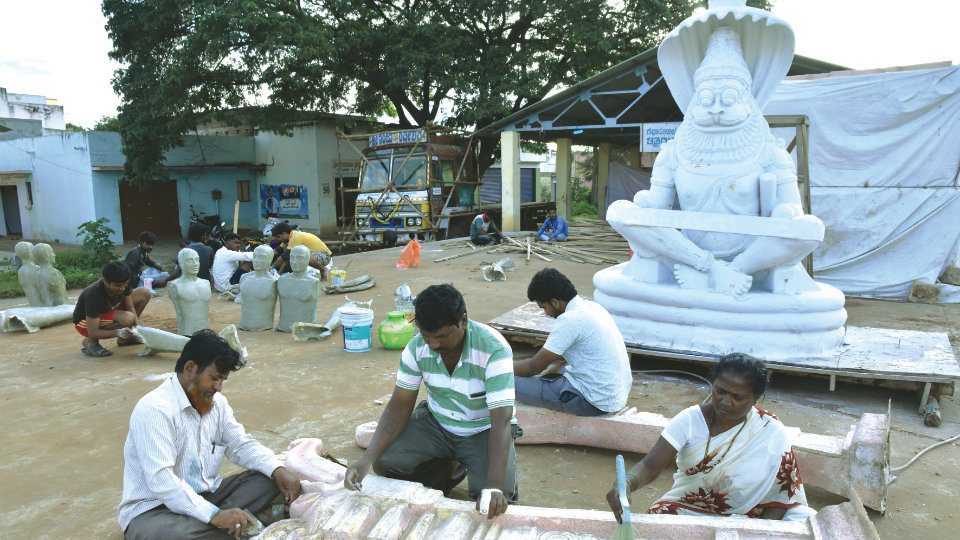 Mysuru: Artisans, decorators, carpenters and painters are working even during wee hours in the APMC Yard premises at Bandipalya on Nanjangud Road to make attractive tableaux that move along with Jumboo Savari on Oct. 8.

Models on India’s surgical strike and Balakot air-strikes on Pakistan, Chandrayaan-2 Mission, major projects such as the 10-laning of Mysuru-Bengaluru Highway and tableaux featuring India’s achievements will be among the main attractions this year. Apart from these, there are tableaux focusing on floods, female foeticide and cleanliness.

At present, the Dasara Tableaux Sub-Committee has finalised 36 tableaux, including those from 30 Zilla Panchayats. Besides, the Department of Information and Public Relations, All India Institute of Speech and Hearing (AIISH) and Cauvery Neeravari Nigam are coming up with their exclusive designs.

While Belagavi and Bagalkot have focused on floods, Dharwad has come up with its own vision on ‘cultural glory,’ Haveri on ‘Kanakadasa blowing the Bugle’, Gadag on ‘Beti Padho, Beti Bachao’, Uttara Kannada on ‘Kadamba Banavasi, Madhukeshwara Temple and Magod falls’, Vijayapura on ‘Vachana Pitamaha Fagri Halakatti’, Bengaluru Urban on ‘ISRO’s Chandrayaan-2 Mission’, Bengaluru Rural on ‘Our march towards cleanliness’, Chitradurga on ‘Female Foeticide’, Davanagere on ‘Surgical air-strikes on Pakistan’, Kolar on ‘Antharagange’, Shivamogga on ‘Fit India’ theme, Tumakuru is working on ‘Integrated farming practices’ and ‘late Siddaganga Seer Sri Shivakumara Swamiji.’

Kalaburagi district’s tableaux is themed on ‘Ayushman Bharath’ health scheme, Ramanagar on ‘Malur Ambegalu Krishna’, Chikkaballapura on ‘Silk and Narasimaiah’, Ballari on ‘ The glory of Hampi Architecture’, Bidar on ‘Fasal Bima Yojana’, a farm insurance scheme of the Union Government, Koppal on ‘Gavisiddeshwara Hill’, Raichur on ‘Google Bridge, Pradhan Mantri’s Sinchai Yojana and NREGA schemes’, Yadgir on ‘Ambigara Chowdaiah’, Chamarajanagar on ‘Tiger reserves amidst natural wealth’, Chikkamagaluru on ‘Shishila Hill’, Dakshina Kannada on ‘Mangaladevi and the country’s biggest petroleum facility’, Hassan on ‘Yettinahole Project’, Kodagu on ‘Awareness on landslides and other disasters’, Mandya on ‘Adichunchanagiri Mutt’ and Udupi on ‘Sri Krishna Mutt Gopura’ are in the list.

Dasara Tableaux Sub-Committee Special Officer M.B. Padmashekar Pandey, who is also the ZP Chief Planning Officer, said that the respective ZPs are assigned the task of making the tableaux, with a Nodal Officer appointed for each ZP.

Mysuru ZP is preparing a replica of Jayachamaraja Wadiyar, marking the birth centenary of the last ruler of Mysore. Apart from all these, tableaux on Mainline Electric Multiple Unit (MEMU) train ‘Ude Desh Ka Aam Nagarik’ (UDAN), a regional air-connectivity scheme and a model of ‘Aane Bandi’ are also being made.