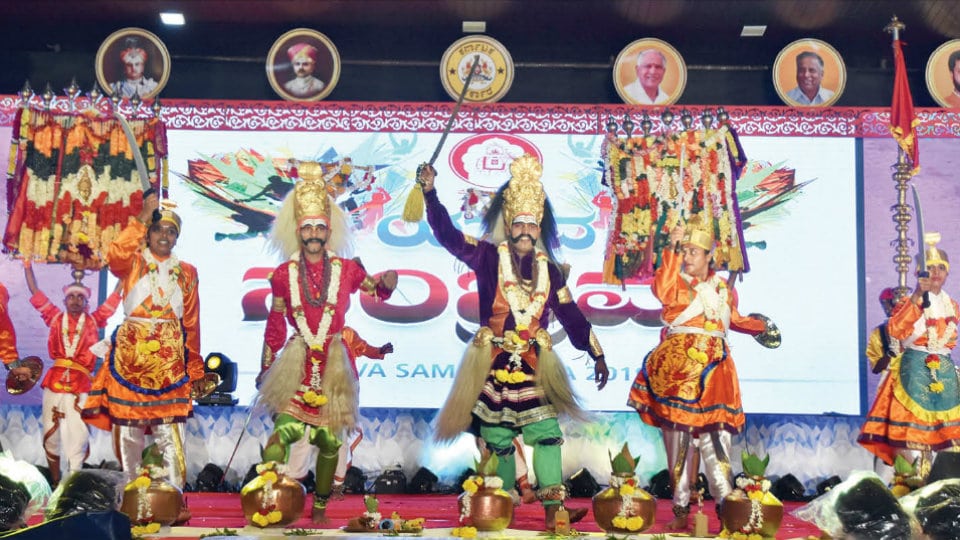 Mysuru: Yuva Sambhrama, the first event of this year’s Dasara celebrations, came to an end with a jam packed audience at Open Air Theatre cheering to some best music and dance performances by college students.

Like previous days, the last day of the event witnessed variety of entertainment programmes presented by students of various colleges across the State. At first, members of Jai Karnataka Mallakamba Academy of Dharwad presented Mallakamba fete that mesmerised the audience. They performed various yogasanas, exercises and some jaw dropping stunts that stunned the audience who gave them a standing ovation.

Addressing the audience,  Academy’s Trainer Siddaruda, who got emotional, paid homage to Lance Naik Hanumanthappa Koppad, a native of Dharwad, who attained martyrdom at Siachen in 2016.

Later, students of Mandya PES Science, Arts and Commerce College entertained the audience performing Poorna Kumbha, Pooja Kunita, Nandi Kamba, Kahale, Veeraghase, Pattada Kunita and other folk forms. This was followed by a dance ballet from special children of Arunodaya School of Mysuru who paid tributes to the soldiers and joining them were students of Jnanadhara Arts and Commerce College, Hunsur. Later, it was the turn of Government First Grade College, Pandavapura and Government First Grade College, Hassan, who also paid tributes to our brave soldiers.

The Yuva Sambhrama Sub-Committee felicitated pourkarmikas and their family members on the occasion.