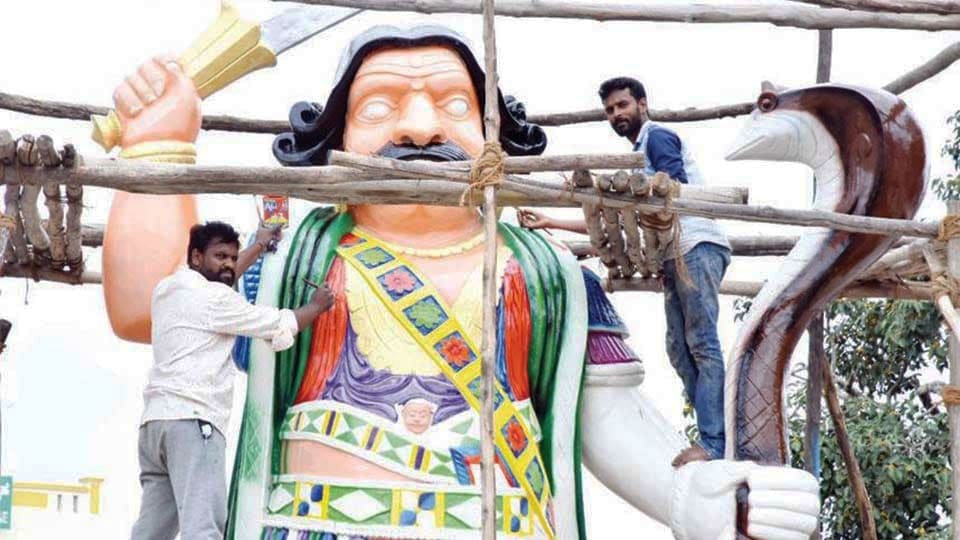 Mysuru: Even as the City Police clamped prohibitory orders in 500-metre radius around Town Hall in the city and atop Chamundi Hill today (6 am to 12 midnight), where a few organisations under the banner of Mahisha Dasara Acharana Samiti were planning to celebrate Mahisha Dasara, hundreds of protestors   took to streets this morning in protest against the Police and MP Pratap Simha, holding them responsible for the cancellation of the event atop Chamundi Hill.

Members of various Dalit and other organisations, who gathered at Dr. Ambedkar Park in Ashokapuram, held a meeting to discuss further course of action in backdrop of the cancellation of Mahisha Dasara. Addressing the meeting, former Mayor Purushotham, who is also the President of the Samithi, maintained that Mahisha Dasara was organised within the law and the MP’s instruction for removal of the stage was ‘unconstitutional.’

Claiming that the DC and the City Police Commissioner had given oral permission for erecting the stage for Mahisha Dasara near Mahishasura Statue, Purushotham dared Pratap Simha for a debate on the issue. They took out a procession from Dr. Ambedkar Park to Kalamandira passing through Ashoka Circle (Ballal Circle), Ramaswamy Circle, JLB road, Field Marshal Cariappa Circle (Metropole Circle) and Vinoba Road to reach Kalamandira where the participants showered flowers on the statue of Mahishasura.

Later the protestors headed to DC office, where they staged a dharna and sought reasons for cancellation of Mahisha Dasara. Purushotham also warned of gheraoing the Governor and CM when they arrive in city for Dasara.

READ ALSO  Mahisha Dasara to be held on Oct. 5