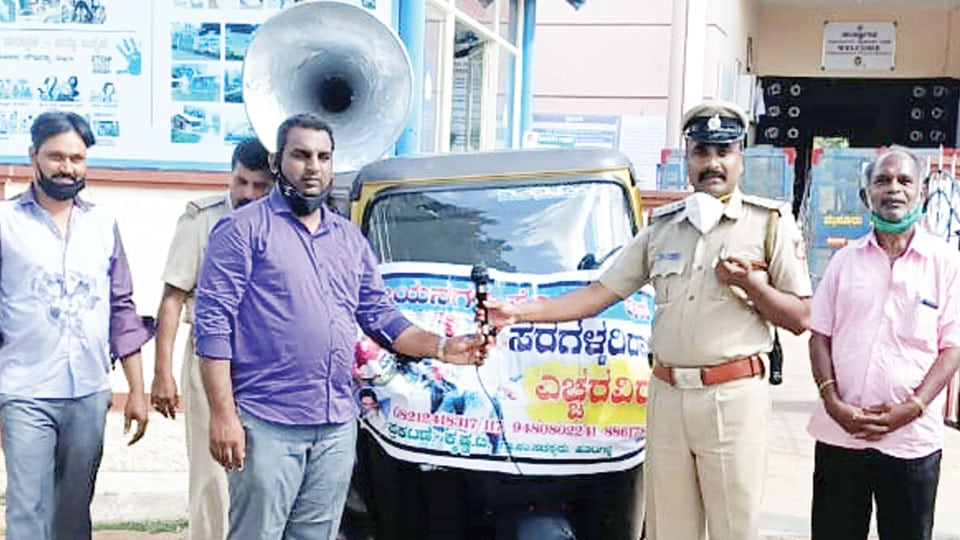 Mysore/Mysuru: With the city witnessing a rise in chain-snatching incidents after a brief lull during the COVID-19 induced lockdown, L.R. Mahadevaswamy, a BJP leader and a former Mysuru Taluk Panchayat member, has chosen to create awareness among the people through a public address system fitted atop a vehicle, in all areas coming under Vijayanagar Police Station limits.

Mahadevaswamy has hired an auto to address women and other members of the public on the measures to be taken for prevention of chain-snatching.

Mahadevaswamy said that the auto used for the purpose is fitted with a public address system and other necessary attachments. This awareness campaign will be carried out in all stages of Vijayanagar Layout and other areas for a week.

Throughout the week-long campaign, the public will be educated on the precautionary measures to be taken such as avoiding lonely walk by women, especially on deserted or poorly lit streets, avoiding exposure of gold jewelry while walking or jogging on streets and alertness about strangers walking close by them.

The public are appealed to chase the miscreants and catch them in case they notice chain-snatching attempts and also to immediately call on Vijayanagar Police Station (0821-2418317) or the Police Control Room (0821-2418339) if they find strangers roaming about on streets in motorcycles in a suspicious manner, he said.

Vijayanagar Police Inspector H.R. Balakrishna, who was present during the launch of the campaign, said that such campaigns will educate the people in staying alert.