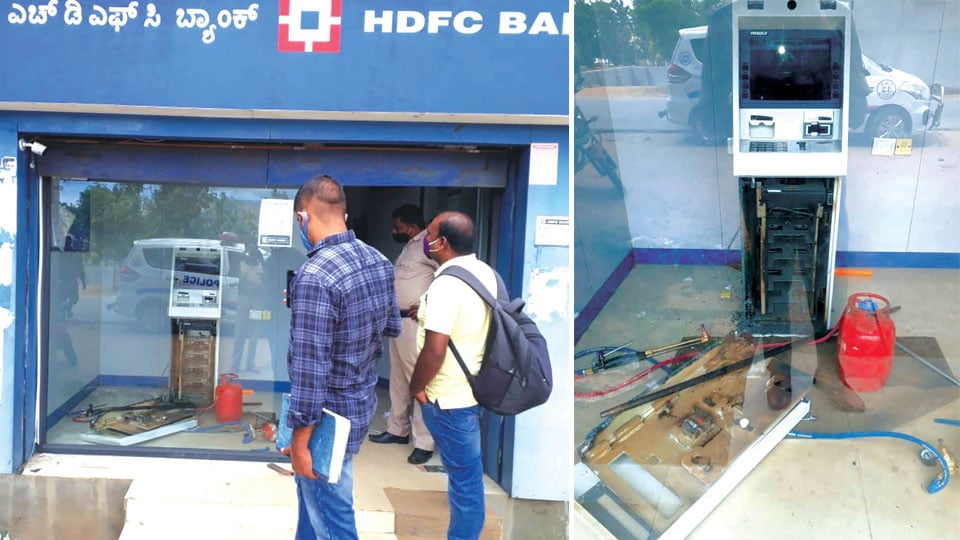 Mysore/Mysuru: A gang of unidentified men broke open an ATM machine belonging to HDFC Bank at Hootagalli Industrial Area after Thursday midnight. They made away with Rs. 12.86 lakh cash while no security guard had been deployed at the kiosk, the Police said.

Interestingly, the miscreants used a gas-cutter to break the machine and escaped with the cash. The incident came to light yesterday morning. The ATM kiosk is attached to Rane Madras Factory and the Police suspect that the thieves would have broken into the cash machine at 1 am on Friday.

It was a well-planned robbery and as the gang entered the ATM kiosk, they painted the outer surface of CCTV camera and later broke the camera with stones. They later cut the heavy-metal machine with gas cutter and stole Rs. 12.86 lakh from the cash chests.

After the loot, the thieves abandoned the gas cutter and other tools and decamped with the money. A case has been registered at Vijayanagar Police Station.

As the miscreants closed the shutter of the kiosk during and after the theft, none noticed that the machine was broken into. Also, the place is deserted after 6 pm as all the factory workers would leave for their homes.

Vijayanagar Police, along with fingerprints experts and a dog squad, rushed to the spot to gather information. “We are looking into various clues and will examine CCTV camera footages before the theft if we can ascertain the identity of the thieves and they might have observed that there was no security guard and would have conducted a recce for many days before the criminal act,” a Police officer told Star of Mysore. No customer came to withdraw money at the time, especially because it was late in the night and the shutter was downed by the gang. “We will also check the footages from nearby buildings and factories for leads,” the officer added.

Local residents said that the bank has not named a security guard at the ATM. “As per rules, if any bank branch is unable to provide security men 24X7 at ATMs, it must close them after 10 pm while keeping the other ATMs of the bank open in areas where there is constant movement of people. As the robbery took place at 1 am, the thieves made sure that there was no one around and committed the crime,” local residents said.