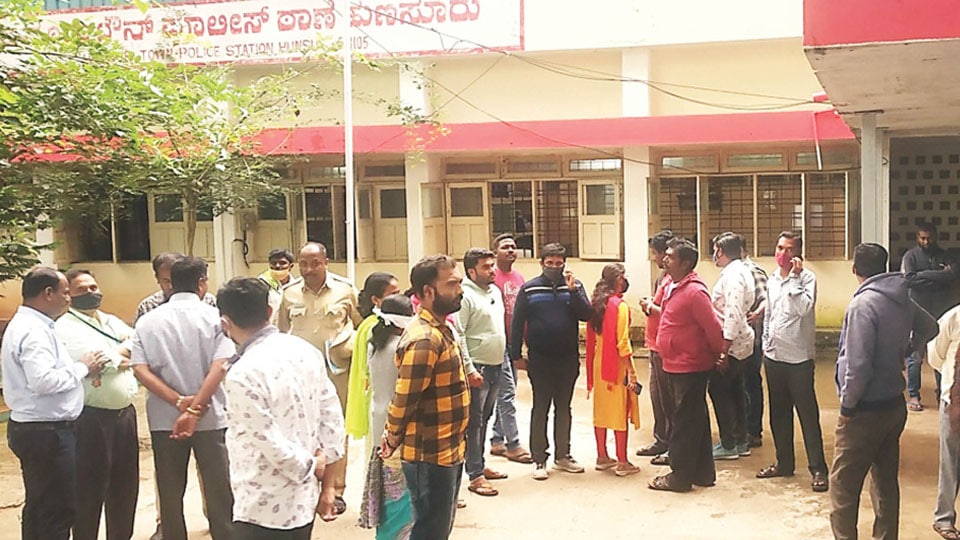 Hunsur: The officials and staff of Hunsur City Municipal Council (CMC) suspended their work on Thursday afternoon and lodged a complaint at the Town Police Station against a CMC Councillor for using foul language and allegedly attempting to assault the CMC Commissioner.

On Thursday morning, CMC President Sourabha Siddaraju had summoned Commissioner Ramesh to her chamber and were discussing about a file during which Ward No. 8 Councillor H.P. Satish Kumar reportedly barged into the chamber, scolded the Commissioner using foul language and tried to assault him.

Meanwhile, another CMC Councillor Manu, who intervened, brought the Commissioner out of the chamber and stopped the ruckus. Other CMC officials and staff, who heard the commotion, stopped their work and condemned the incident.

The CMC officials and staff, along with Commissioner Ramesh later went to the Town Police Station and lodged a complaint. The complaint stated that CMC Councillor Satish had obstructed a Government servant from performing his duty, used foul language, tried to assault the Commissioner and created a sense of fear in the Office and demanded                                       protection to them. Following the incident and the staff suspending their work, the CMC Office wore a deserted look causing a lot of inconvenience to the public, who had come for various works.

The officials and staff of Hunsur CMC Office said that they come from other places for work and with elected representatives showing their power on helpless workers like them, it was very difficult to work in such situations. “When a person can try to assault the Commissioner itself, we too can be victims later. Fear has gripped us especially for women staff. We can continue to work only if we are provided security,” said Revenue Officer Nanjundaswamy, Environmental Engineer Roopa and other staff.

Meanwhile, CMC President Sourabha said that she was holding discussions with the Commissioner pertaining to drinking water and streetlights and were also looking into the file of the deceased staff, when Satish, in a raised voice, said that no works were taking place in the Wards and the residents were shouting on them.

She further said that Commissioner Ramesh, reacting to Satish’s statements, said that he and the staff were working within the boundary of the law and added that they cannot work beyond that boundary following which wordy duel broke out between them. The CMC President said that it was she who intervened between them and stopped the fight.

Meanwhile, Satish, alleging that the CMC Commissioner had used foul language and tried to assault him, has filed a counter complaint with the Police. On Friday, staff, who reported to work, were seen conducting their routine work in a sense of fear.