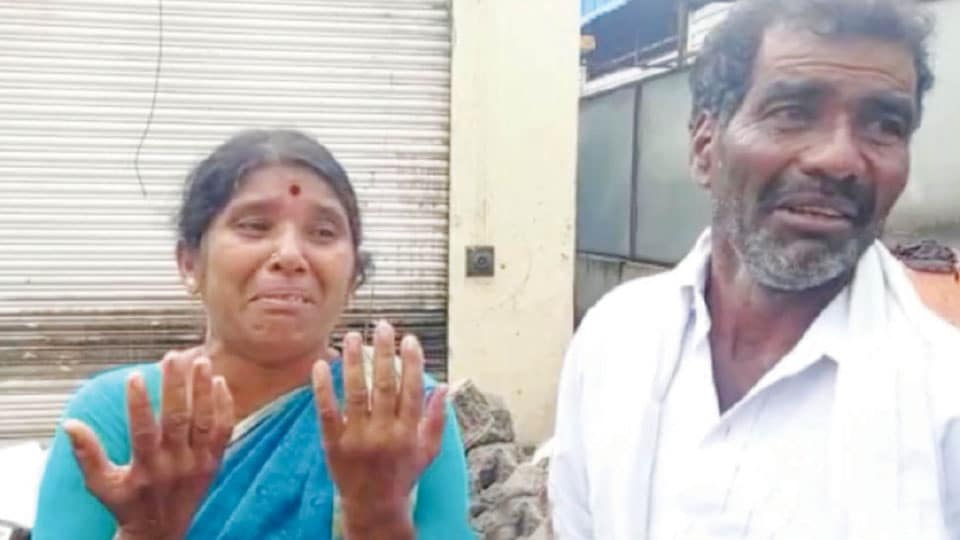 This is the second such incident in a month

Chamarajanagar: Miscreants, who broke the glass window of a car, have robbed Rs. 9.5 lakh belonging to a farmer couple which was meant for purchase of land. The incident took place in front of the District Administration Bhavan on B. Rachaiah Road on Thursday afternoon and this is the second such incident to take place in a month.

Nagappa and Sarojamma are the farmer couple from Acchattipura village in the taluk, who lost their money.

Nagappa, who had purchased two acre agricultural land of Yaraganahalli Beeramma, had come with his wife Sarojamma in a car to the Sub Registrar’s Office. Most of the registration process was completed and the couple had decided to pay the remaining amount of Rs. 9.5 lakh to the land owner after lunch.

Nagappa and Sarojamma, who returned after having their lunch, found the car’s front glass window broken and on examining further, they were shocked to find the cash bag with Rs. 9.5 lakh cash in it missing and immediately informed the Police. The Police, who rushed to the spot, conducted mahazar, registered a case and have launched a hunt to nab the miscreants.

Circle Inspector Mahesh said that they reached the spot on receiving information and conducted an inspection. “It is yet to be known whether the crime was committed by a single person or a gang. We have commenced the investigation and the culprit will be brought to book soon,” he added.

Second such case in a month: This is the second such incident to take place in a month that too in a busy place.

On Oct. 19, a teacher, who had withdrawn cash from a bank on B. Rachaiah Road, was waiting for a bus at Bhuvaneshwari Circle to go to Nanjangud, during which miscreants diverted his attention and decamped with Rs. 2 lakh cash. The culprits in this case are yet to be traced. Meanwhile, the public accusing the Police of not being active have urged the higher Police officials to take steps to prevent such incidents from taking place in future. They also urged the Cops to immediately trace the accused, recover the stolen cash and return it to the farmer couple soon.