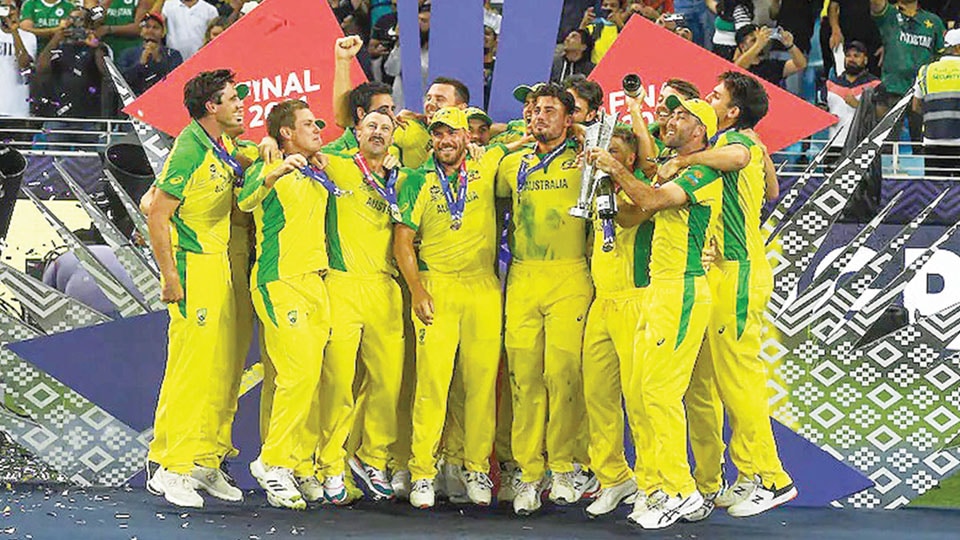 Hearty congratulations to the Aussies (OZs) on lifting their 1st T20 ICC World Cup. The 2021 ICC Men’s T20 World Cup was the seventh ICC Men’s T20 World Cup. ‘Ring of Fire’ at the Dubai International Stadium roared with colourful fireworks as Mitchell Marsh scooped the 113th ball to the boundary. OZ dressing room rose ecstatic as the players dashed on to the centre stage, crowded Marsh, hugged and kissed him. Glenn Maxwell showed the rare sentiment in him, shedding tears of joy over skipper Aaron Finch’s shoulder. It was all similar to the emotions one would witness at a ‘Soccer World Cup’ finals. Geoff Marsh, father of Mitchell Marsh and Shaun Marsh, the former OZ opener alongside David Boon, would have felt proud and on top of the world to witness the ‘Chip of the Old Block’ being the architect of the huge feat and at the centre stage of celebrations.             Well done Mitchell Marsh.

Ironically, OZs were never the favourites this time. Though names in the team spelt class, they never appeared a confident bunch in the league stage. They, however, brought all the skills together when it mattered most; in the semis against the mighty Pakistan and in the finals against the Kiwis.

Particularly mention has to be made of David Warner. After dismal failure in the IPL and indifferent performance in the league, he stood rock solid in both the knock out matches; thus paving way for victories. With skipper Finch, Steve Smith and Glenn Maxwell not being at their best, the most vital position; No. 3 looked vulnerable. It was Mitchell Marshall who came good. Looking back to the semis against the Pak, it was Mitchell Marshall who partnered Warner in building the foundation on which Marcus Stoinis and Matthew Wade invaded the Pak bowling attack.

In the finals, Mitchell Marshall looked a confident crusader flicking the 1st ball faced for a mighty six. Later, he cut, drove and pulled bowlers with aplomb, power and tact; as he steered the OZs to their magnificent victory with 7 balls to spare and thus exhibiting all virtues of the No. 3, the OZs were desperately looking for. Best to him going forward. Tracks in the UAE are a bit spongy and low bounce can cause endless problems to both bowlers and batsmen. Under the circumstances, 160 plus looks formidable chase. This is what made both the semis and the finals good to watch and all the three ended with an over to spare. Earlier, skipper Kane Williamson stroked a brilliant                  85 — highest by a captain in a T20 World Cup — surpassing the Lankan skipper Kumar Sangakkara’s 68. Kane was calm and composed as he went through the 48 ball knock. Devon Conway’s absence due to a serious injury had its impact. But, kudos to the Kiwis as they  fought tooth and nail till the end.

We wish the Kiwis and our Men in Blue the very best as they commence yet another series of T20s and Tests.