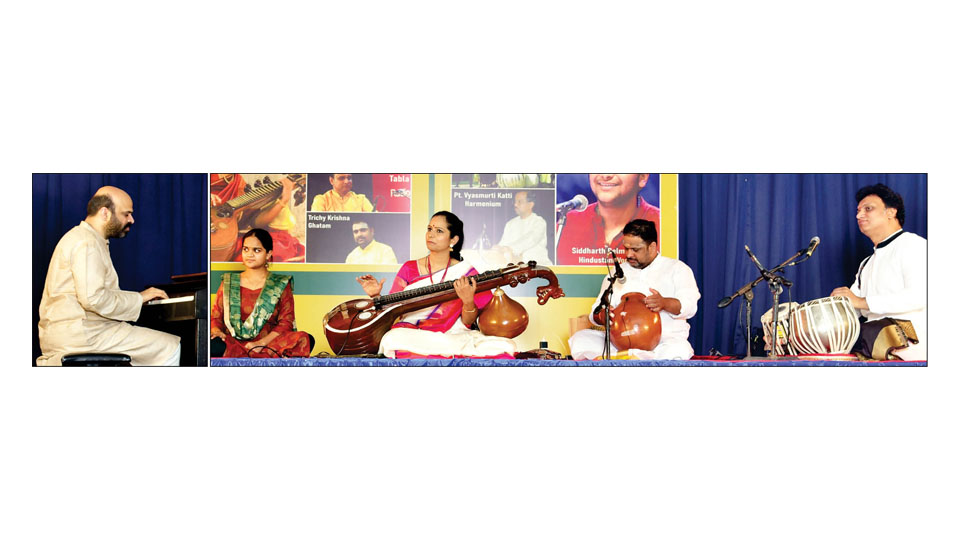 A few decades ago, while performing a jugalbandhi at Sheshadripuram Ramotsava Samithi in Bengaluru, Vid. N. Rajam, the legendary violinist along with Vid. Mysore M. Nagaraj, spoke a few words on how a jugalbandhi should be. ‘It must be like each artiste, adding a flower to make a beautiful bouquet’ was the wonderful approach of a true artiste to a jugalbandhi.

This came to one’s mind after listening to B.S. Pandit Memorial Concert ‘Saraswati.’ B.S. Pandit was fondly remembered on 18th and 19th of November at ‘M. Govinda Rao Memorial Auditorium’ in GSSS Institute of Engineering and Technology for Women (GSSS IETW) premises on KRS Road in city.

A jugalbandhi (though it was not mentioned so in the invitation) by Anil Srinivasan (piano) and Jayanthi Kumaresh (veena)on the 18th and a Hindustani Vocal by young Siddhartha Belmannu were the attractions. Pramath Kiran on tabla and Trichy Krishna on ghata accompanied the duo on the first day and Pandit Ravindra Yavagal and Pandit Vyasamurti Katti accompanied on tabla and harmonium on the second day respectively. There was also a pre-concert interaction with students of Music titled ‘Strings of Hope’ on the 18th.

Anil and Jayanthi are masters on their respective instruments. It is a wonderful experience to hear their individual performance. While playing together, there has to be a tremendous like-mindedness to make the experience more musical. The success of a duet depends probably more on the manodharma that is preferred to be identical.

However, they started off with the raga Hamsadhwani. Jayanthi took the lead and played an absorbing prelude. Anil created a scintillating shower of swaras inbetween. The popular ‘Vatapi Ganapatim Bhajeham’ was as green as ever. In the Kalpana swaras, Jayanthi was superb as usual. Anil did join for a few sangathis and went on exploring new vistas which were beyond the frame of usual Kalpana swaras.

Karnatak music, which is filled with a number of embellishments and nuances is not easy to play on a western instrument like piano. Anil has succeeded in adopting it and has achieved a commendable mastery. His imaginations and improvisations are awesome.

He was in a mood to interact with the students, tell them a story and make them sing a popular tune along with the piano. A slightly surprised Jayanthi had to take over to present Khamach alapana. Anil went on to sprinkle, shower and spray soft and scintillating swaras that were sparkling, exciting, dazzling and twinkling. Be it ‘Sujana Jeevana’ or Thillana, Jayanthi’s playing was engrossing and captivating. Every phrase was stunningly perfect. Pramath Kiran and Trichy Krishna were cheerful during the short Tani. ‘Vande Matharam’ brought the curtain down for the first day.

Siddhartha Belmannu is a very promising young singer blessed with a rich voice that can express all his musical thoughts. The support given by very senior accompanists, Ravindra Yavagal and Vyasamurti Katti enhanced his zeal and resulted in a fantastic baithak. This young singer dives deep into any raga and sincerely starts improvising its possibilities. Aahir bhairav and Hindol were the two main ragas he had chosen to elaborate. The morning Raga unfurled leisurely in his rich voice. Traversing comfortably in two octaves, he was exploring its fineness in every phrase. ‘Rasiyamhara’ in vilambith ek tal and the popular ‘Albela Sajan Aayore’ in Dhruth was followed by ‘Mayire man bhavan’ set to ek tal were in full bloom.

Rag Hindol (which has nothing to do with Karnatak Hindola) had thick shades of Hamsanandi (minus Ri). Nishad too is only supportive in this Rag. His energetic singing introduced new dimensions of this Rag. ‘Eri Mayi Piya Ke Sang Khelo,’ the bandish in vilambit lead to ‘Chanak Boond Bhari,’ another bandish in Dhruth Teen tal. A cascade of sargam was enjoyable. It was the spontaneity of his music that reached every listener’s heart.

READ ALSO  A fine blend of...: Music and Dance