Home » News » Bakrid: Sale of sheep picks up in city 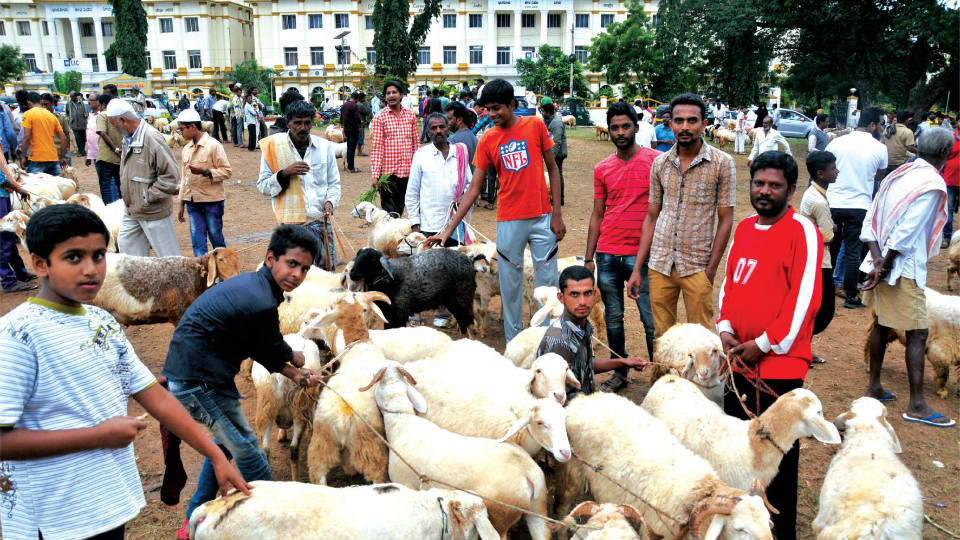 Bakrid: Sale of sheep picks up in city

Mysuru: With just two days remaining for Bakrid Festival, sale of sheep has picked up in city with sheep rearers from Srirangapatna, Pandavapura, Arakere, T. Narsipur, Bannur and other places bringing their livestock and doing brisk business since a week.

Bleating goats and sheep of various breeds from different places await the buyers. Known for its special taste owing to its fat content, the sale of Bannur breed sheep is brisk in city. Apart from livestock from Bannur, sheep from Kirgawal and other places too have made their way to the market.

With no designated place for the sellers to sell their livestock, the Millennium Circle (LIC Circle) on Mysuru-Bengaluru Road has virtually turned into a fair (jathra) with hundreds of sheep of various breeds being tied around the circle and vacant spaces near Torchlight Parade Ground to woo the customers.

Apart from LIC Circle, sheep is also being sold near Meelad Park on Ashoka Road, Rajivnagar and other places.

While few persons complained that the sellers and buyers were hampering smooth flow of traffic in LIC Circle, the sellers said that they were not blocking the traffic during the sales and urged the District Administration to allot them a designated place to sell their livestock.

Mir Humayun, President of Muslim Co-operative Bank, Mysuru, said that the prices of sheep have increased by 10-15% this year.

Samiulla Khan, who has been in the meat business for over two decades, said that the demand for Bannur sheep has picked and buyers from different places are thronging the place to buy sheep of their choice.

Bakrid is the festival of sacrifice for Muslim brethren, Id-ul-Zuha (Arabic) and Bakrid in India is celebrated all over the country. It falls on the 10th day of the Muslim month Zul-Hijja. On this day Muslims sacrifice a goat or sheep to commemorate the sacrifice of Prophet Ibrahim, who willingly agreed to kill his son at the behest of God. But because of his devotion to God, his son was saved and a goat was sacrificed instead.

The festival coincides with the Haj pilgrimage in Mecca. Prayers are offered in the Mosques and the sacrificial meat is then distributed after the Id prayers. Special delicacies are prepared and served among family and friends on the occasion.

Giving charity and feeding the poor on this occasion is also part of Muslim tradition.