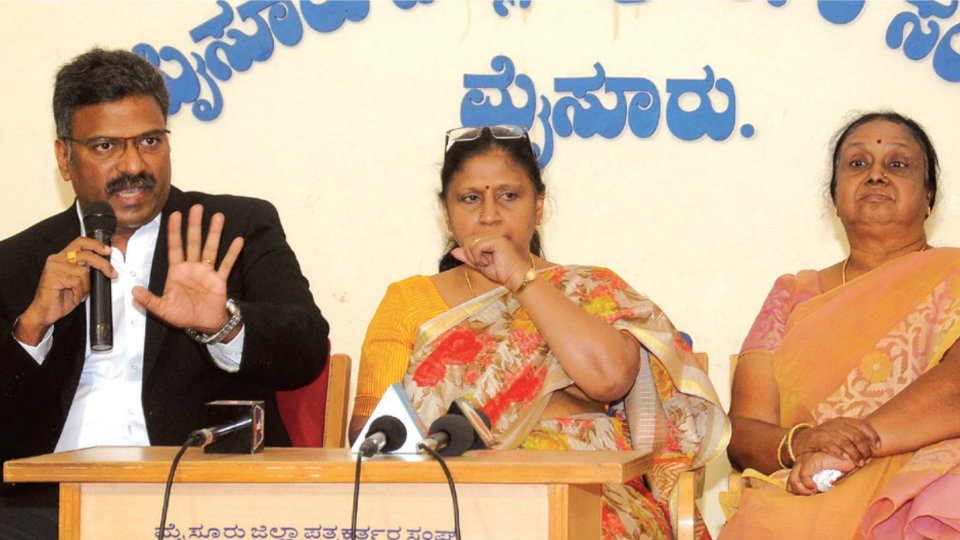 Accusing the real estate mafia of attempting to grab Balija (Naidu)Sangam property in city, advocate S. Arun Kumar has warned the District Registrar and MUDA officials of filing cases against them if they connived with those who attempt to grab the Sangam property.

Addressing a press meet along with Balija Sangam Founder Family members at Pathrakarthara Bhavan here yesterday, Arun Kumar said that the Balija Sangam, consisting of members belonging to the Balija Naidu Community came into existence in the year 1937 and added that the Sangam initially functioned in the office premises of Maruthi Motor Service on Bengaluru-Nilgiri Road in city.

He said that the Sangam, in 1944, applied to the then CITB requesting for allotment of a site to construct a hostel building and added that the CITB, at a meeting held on Nov. 29, 1944, agreed to allot site No. 52 measuring 3,520 sq. yards on Krishnadevaraya Road in Jayanagar and asked the Sangam to make a payment of Rs. 660 towards the cost of the site.

Since the Sangam was not able to pay the said amount of Rs. 660 to the CITB, it approached the proprietors of Maruthi Motor Service, namely R. Muniswamy Naidu, R. Thangavenu Naidu and R. Kumaraswamy Naidu, who were brothers, requesting them to pay the amount of Rs. 660, he said and added that the proprietors of Maruthi Motor Service with an intention of uplifting and encouraging the Balija Community obliged to the Sangam’s request and paid Rs. 660 towards the cost of site No. 52 and the said donation is recorded in the books and minutes of Balija Sangam.

He further said that the brothers had together donated Rs. 3,701 and Kumaraswamy Naidu had personally donated Rs. 1,001 to the Sangam.

Continuing, Arun Kumar said that with the passing away of Thangavenu Naidu in 1964, R. Muniswamy Naidu in 1968 and R. Kumaraswamy Naidu in 1973, the Sangam since 1973 started witnessing irregularities in its functions and added that now, certain Sangam members and outsiders with vested interests have allegedly joined hands with real estate mafia by misusing the property and the hostel building, thereby violating the very purpose of allotment made by CITB.

Subsequently, the Sangam lodged a complaint with the jurisdictional Police Station besides requesting the Mysuru DC, MUDA officials and the Registrar of Co-operative Societies to take necessary action against those officials who are in connivance with the people indulging in misusing the said property.

Stating that officials should give no room for anyone to misuse the landed property on which the hostel has been functioning for decades, Arun Kumar warned that criminal cases would be registered against those officials conniving with real estate mafia. Late Kumaraswamy Naidu’s daughters Vimala Ashok, Vasantha Haridas, Nirmala Naidu and Savithri Mohan were present at the press meet.