Home » News » Bandipur Fire Watchers to be insured for life 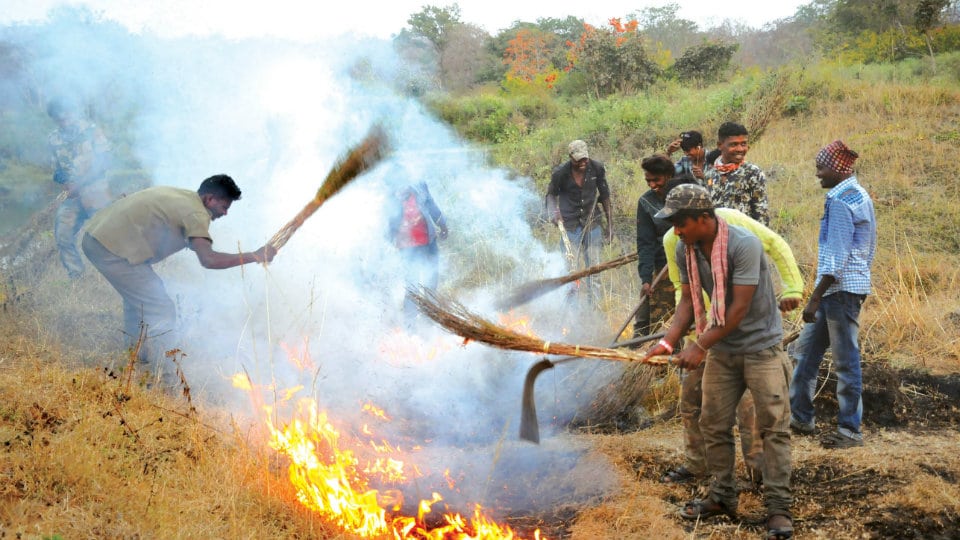 Bandipur Fire Watchers to be insured for life

Mysuru: The Forest Department has come forward to protect the lives of Bandipur Forest Fire Watchers, who risk their lives to prevent and also to control forest fires. For the first time, life insurance facility is being provided to the Fire Watchers besides taking steps to guard the forest 24 hours a day by deploying personnel in two shifts.

Forest Fire Watchers are men who work from fire towers above timberlines to help prevent wild fires. From their viewpoints, Fire Watchers can detect smoke and fire rising from the trees far off in the distance and report fire and smoke in their assigned areas.  They are knowledgeable about weather systems, fire weather and fire behaviour.

Forest Fire Watchers may work full-time or part-time and many hold temporary positions as they usually work during the forest fire season.

Some Fire Watchers live and work at their fire towers throughout the fire season. They work overtime during wild fires to support the ground staff and may also work additional hours when the danger for fire is high due to critical fire weather conditions, such as strong winds and extremely dry weather conditions.

The forest fire that erupted in Bandipur Tiger Reserve in February due to miscreants lighting the fire had devastated hundreds of acres of pristine forest. The National Remote Sensing Centre of the Indian Space Research Organisation (ISRO) carried out an assessment of the total area affected by the fire. On Feb.25, it estimated the extent of burnt area to be about 10,920 acres. Choppers of Indian Air Force were used to douse the fire.

The Forest Department have now taken all precautionary steps to prevent forest fire and have even sought the co-operation of villagers and youths in forest borders and are conducting awareness programmes to sensitise people about the devastation that will be caused due to forest fire.

And for the first time, in a bid to protect the welfare of Forest Fire Watchers, the Forest Department is providing life insurance to Fire Watchers, both temporary (working on contract basis) and permanent. The works on collection of documents has already begun for the same.

Bandipur Forest is spread around 1,024 sq. kms which is divided into 13 zones. There are 40 Watchers (daily wagers) and 15 permanent Waters deployed in each zones to prevent forest fires. A total of 500 persons living in forest borders have been deployed as Watchers on temporary basis and there are 200 permanent watchers who have been provided training to control and extinguish small fires in forest. From Jan.1 till the end of summer, temporary Fire Watchers will be working in their assigned areas.

Earlier, the wages of temporary Fire Watchers, who were working on daily wage basis, were being given through a Range Forest Officer (RFO) which was being misused on some occasions, resulting in people not coming forward to take up the job and hence, the wages are now being deposited directly into the bank accounts of Fire Watchers.

Earlier, Fire Watchers used to come at 10 am daily, prepare a broom out of green leaves to beat the fire and enter the forest in the Forest Department vehicle at 11 am and come back at 5 pm.

But now, the forest is guarded for 24 hours in two shifts and for the first time, temporary Fire Watchers have been provided uniforms-like T-shirts and even lunch.

Drone to keep a hawk-eye vigil over forest

Following miscreants lighting fire to the forest in February this year, a drone with high megapixel camera will be used to keep a hawk-eye vigil over the forest and also to keep a watch on the movement of people in forest borders.