Home » News » After Rajinikanth, Akshay Kumar to film in Bandipur tomorrow for ‘Man Vs Wild’ episode 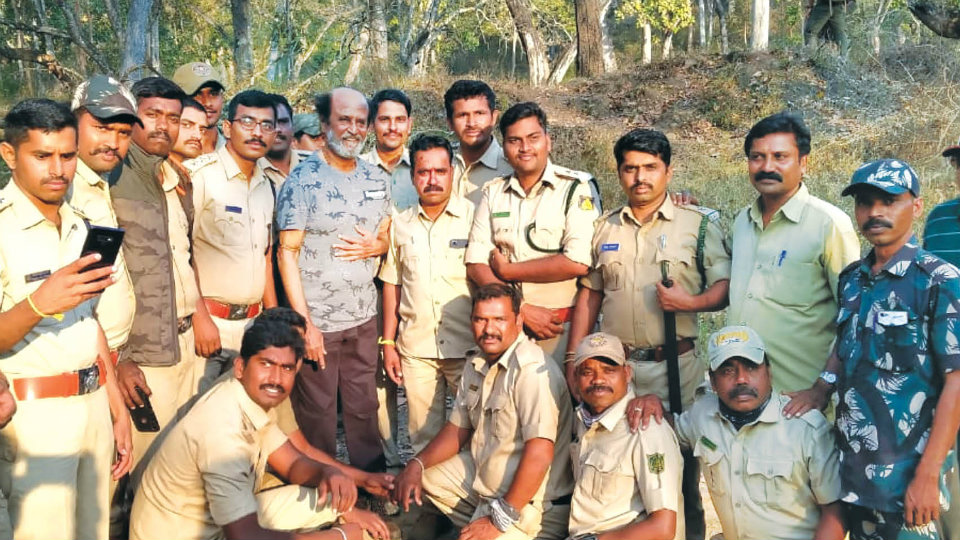 After Rajinikanth, Akshay Kumar to film in Bandipur tomorrow for ‘Man Vs Wild’ episode

Rajini returns to Chennai by last night’s flight, one day earlier than scheduled

Mysuru/Mysore: Amidst protests by Green groups against the filming of a new episode of Man Vs Wild, a survival television series, in the ecologically sensitive area within the Bandipur Tiger Reserve, Tamil Superstar Rajinikanth completed his shooting yesterday. He left for Chennai in the regular Mysuru-Chennai TruJet flight from Mysore Airport at 8.30 pm yesterday, one day earlier than scheduled.

Rajinikanth traversed the distance from Bandipur to Mysuru by road and flew to Chennai. The latest episode of the survival series will feature Rajinikanth with the show’s host, Bear Grylls. Though the Thalaiva fans are excited with the photo shoot, wildlife activists have expressed concern over the timing of the episode inside the National Park noted for its tigers and rich biodiversity.

Bollywood actor Akshay Kumar will arrive at Bandipur tomorrow to shoot his part in the Man Vs Wild series and today, the Bear Grylls team is identifying the suitable place for the star’s shooting.

Bear Grylls is British adventurer and television presenter and an earlier episode of the series featured Prime Minister Narendra Modi which was shot at the Jim Corbett National Park in Uttarakhand last year.Rajinikanth is the second Indian personality to be featured on the Discovery Channel programme after PM Modi.

The series producers have five days time to shoot inside the forests and Rajinikanth has completed his schedule while Akshay Kumar will complete his six-hour schedule tomorrow, T. Balakrishna, Project Tiger Director, Bandipur Tiger Reserve told Star of Mysore this morning.

Reports said that Rajinikanth and the film crew shot in the forest area in Kalkare and Moolehole (near the century-old Iron Bridge) in Bandipur and the Superstar suffered minor injuries during the filming. The shooting had to be stopped midway following the injuries and officials said that the actor was fine.

However, returning after the shoot, Rajinikanth told presspersons at the Chennai Airport that he was not injured during the shoot. “There were some reports that I was injured. This is not true and I was just pricked by a few thorns,” the actor said.

The permission to shoot inside the Tiger Reserve was granted by the authorities in Bengaluru but the permission letter did not mention actor Rajinikanth’s name but mentioned a ‘special guest’. An agreement was signed between the Karnataka Forest Department and a Mumbai-based studio for shooting the documentary in December 2019, sources said.

The crew was only permitted the use of cameras and a couple of equipment and there was no permission to use heavy vehicles carrying generators, electricity, explosives, flash lights or reflectors, officials said.

The move to allow shooting of Man Vs Wild, however, invited widespread criticism from environmentalists who argued that the presence of the film crew not just endangers the animals but also has raised fears of igniting forest fires that could start and spread quickly due to the prevailing dry conditions.

READ ALSO  Former MLC’s land near Bandipur to be reclaimed

“They could have filmed in the monsoons as fires can start and spread very quickly during the summer months,” Joseph Hoover, conservationist and former member of the Karnataka Wildlife Board said.  He added when the shooting of the episode takes place in Bandipur, the Forest Department would be more focused on providing security to the VIPs instead of preventing forest inferno.

The fears of activists aren’t without basis as Karnataka has lost thousands of acres to forest fires. The major ones in recent times include the one in 2013, 2017 and 2019 that account for around 8,000 hectares, according to estimates by activists.