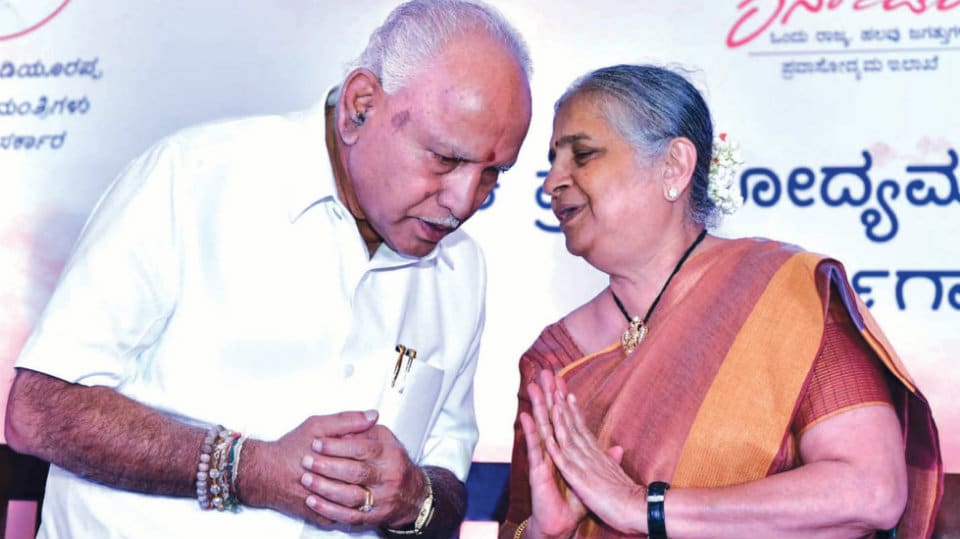 Bengaluru: The State Government is committed to take Karnataka to the fifth place in the Nation’s tourism sector as Karnataka is privileged to have innumerable and exquisite tourist destinations, said Chief Minister B.S. Yediyurappa.

He was speaking after inaugurating a workshop on the Karnataka Tourism Policy 2020-25 held yesterday at a private hotel in Bengaluru. The two-day workshop was aimed at providing a floor to experts to express their perspective, bring together ideologies and put forth an efficient policy for tourism in Karnataka.

He assured the tourism sector that he would sanction extra funds in the budget to promote tourism as a major industry. Funds will be allocated to provide facilities for tourists at various destinations. He directed the officials to work towards taking Karnataka to the fifth place in India.

He said the Centre has identified tourism as one of the engines to propel the country’s economic growth. “It surely holds true in the case of Karnataka. Karnataka is home to a rich world heritage, wildlife, waterfalls and more. We would like to encourage new destinations, fresh ideas, more investment and wider job opportunities in the tourism industry of the State,” he said.

Yediyurappa promised all support to improve tourism in the State and that there will be no dearth of funds to improve tourist destinations and provide facilities. He pointed out that Rs. 105 crore was spent on 144 tourism projects and another Rs. 149 crore is being released for 33 new projects.

Niche sectors to be included

“Key niche sectors are being included in the proposed tourism policy. We envision making tourism a significant revenue generator. In doing so, we hope to impact the multiplier effect through sections of the society from jobs to preserving heritage to improving infrastructure,” Ravi added.

The State government is looking at more Public Private Partnership (PPP) models in the sector. “There have been no new tourism destinations post independence and whatever being projected are natural sites and built before independence. There is a need to focus on the aspect in the policy and the government is looking at more of PPP models,” Ravi said.

Chief Secretary T.M. Vijay Bhaskar said Maharashtra, Tamil Nadu, Andhra Pradesh and Rajasthan get a large number of tourists unlike Karnataka. Despite Karnataka having a 320-km coastline, tourists prefer Kerala and Goa which  needs to be analysed and it should be the main intention of the policy, he said.

Revenue Minister R. Ashoka suggested that Karnataka should follow the Sydney-model in Australia where tourists travel 10 hours to see the penguins and Igloos just for two hours.

Tourism Secretary T.K. Anil Kumar said the Government is thinking of drawing models of other States where subsidy for infrastructure has been given at a higher slab like Rs. 10 crore, but in Karnataka subsidy starts from Rs. 3-4 crore. This is being discussed in the policy.

READ ALSO  Live up to expectations of your degree: Sudha Murty

Members of various tourism groups suggested that 50,700 more hotel rooms be built in Karnataka with jobs to 1.86 lakh people to improve the GDP. There should be continuous carnivals and events in every city to draw tourists, they said.

The workshop on the Karnataka Tourism Policy 2020-25 is focused on getting opinions and suggestions from all stakeholders and the policy will include all the inputs, said Sudha Murty, Chairperson, Vision Group for Tourism, Karnataka.  “Tourism is not just about entertainment. Rather, it is one of the core avenues of our country’s economy. It is crucial that we become aware of the challenges ahead for the tourism industry, and the profit and loss incurred. This is a platform where we pool in ideas of various experts of the industry and put forth a new policy. By this, we not only aim to attract more tourists but also make them feel proud of our State’s heritage,” said Sudha Murthy, who is also the Chairperson of Infosys Foundation.