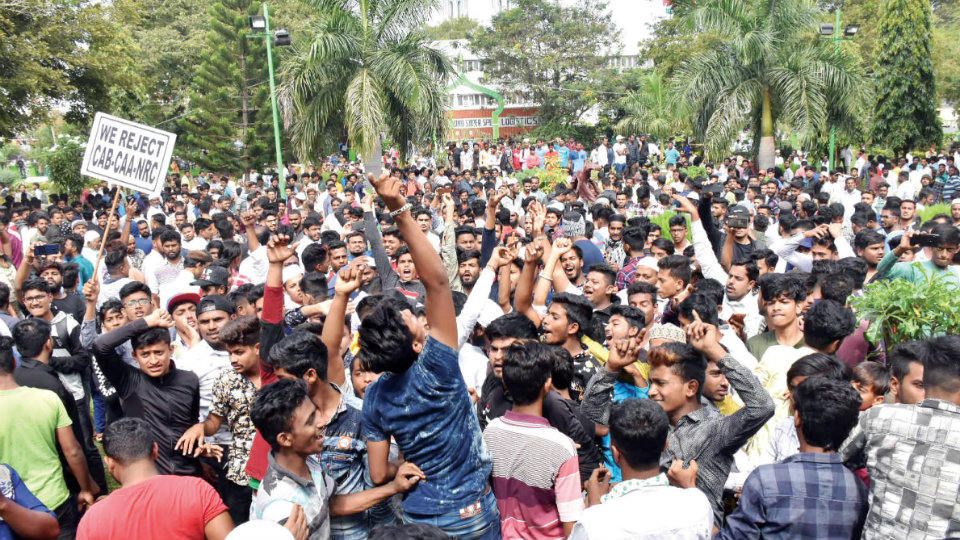 Echo of protests against Citizenship Act: Section 144 clamped across State for 3 days

Mysuru: Following protests planned by various groups against the Citizenship Amendment Act (CAA) this morning, Section 144 of the CrPC was imposed across the State including Mysuru city. It will be in force till the midnight of Dec. 21 (Saturday).

During this period, permission to hold protests and rallies will be denied, said senior Police officials. Assembling of more than five people at a single place has also been banned. Police said that the ban orders had been imposed as the Police were anticipating a law and order problem.

Officers have been asked to ensure that prohibitory orders are in place for the next three days depending upon the situation. However, schools, colleges, offices, malls and shopping complexes where there are usually large gatherings functioned normally.

Following the clamping of ban orders, a scheduled protest by CITU at the Town Hall premise in city this morning has been withdrawn.

High alert has been sounded in areas including N.R. Mohalla, Mandi Mohalla, Udayagiri, Shanthinagar, Beedi Colony and Kalyanagiri and forces have been deployed in front of religious places.  Hundreds of protesters had gathered at Meelad Bagh on Ashoka Road to protest this morning and the Police had sent forces and the Mobile Command Centre to monitor the situation there. The protesters were convinced not to break the law as ban orders were imposed. After some time, the protest was withdrawn.

The Police have also warned citizens not to share provocative messages on social media. The IT cell of the city Police had been asked to monitor online activity and take necessary action. Those who violate the law will be booked under Section 188 (offence of disobedience of an order duly promulgated by public servant has been committed which causes obstruction, annoyance or injury to the legal authority passing the order) of the IPC, Police warned.

Meanwhile in Bengaluru, thousands of protestors gathered in large numbers at the Town Hall to voice their dissent against the amended Citizenship Act and the NRC. The Police had to resort to mild charge to disperse the crowds.

Many protesters were bundled into KSRTC buses and taken to far off places so that they cannot reach the Town Hall again to protest. The imposition of prohibitory orders in Bengaluru has prompted anger and frustration among several people especially those who were planning to participate in protests against the Citizenship Amendment Act.

At least 200 people including historian and academic Ramachandra Guha were detained in Bengaluru as they attempted to protest in two places. Ramchandra Guha was forcibly detained by the Police while he was giving interviews and was dragged away into the bus by men in khaki.  The 61-year-old was participating in a protest at Bengaluru Town Hall.

The detentions from Town Hall and Mysuru Bank were made as the protestors had gathered despite prohibitory orders being in place in the city.