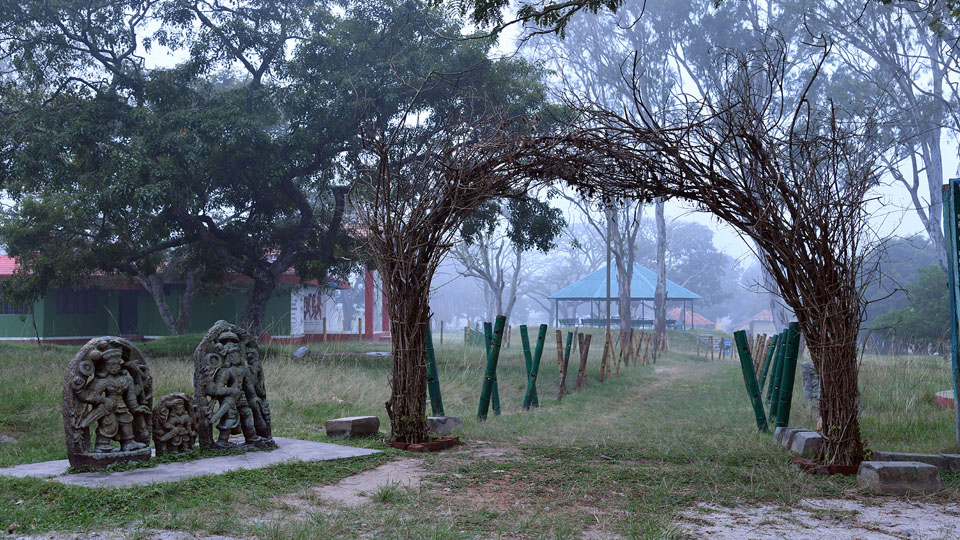 Bandipur Tiger Reserve, known for tigers, leopards and elephants and a host of other wild fauna and flora, is witnessing a surge in tourist footfall these days and on an average 500 to 600 people visit the Park for safaris. The crowd is more during holidays and weekends.

Now tourists have one more reason to visit Bandipur as the cottage and dormitory area (old ticket safari counter) has been beautified and has been given an aesthetic look with Pergolas, wooden walkways and sitting areas to relax and unwind amidst nature. The Forest Martyrs Memorial too sports a new look.

And the Park authorities have not spent money on the beautification. They have used weeds abundantly available in the wild and the Forest Department employees have contributed through “Shram Daan.” The beautification works were initiated by former Director of Bandipur Tiger Reserve (Project Tiger) C. Balachandra (now retired) and has been completed by the present Director S.R. Natesha.

Interestingly, Senna spectabilis weed wood has been used to make the wooden structures and not a single piece of other wood has been used. Senna spectabilis is quite abundant in Bandipur Tiger Reserve. The species had initially been introduced to Kerala as an ornamental species — as avenue trees in Wayanad. Over time, the species turned intrusive and has now taken the form of a weed that threatens native tree species.

An adult Senna spectabilis tree grows up to 15 to 20 metres in a short period of time and every year distributes thousands of seeds after gregarious flowering. The thick foliage arrests the growth of other indigenous tree and grass species and causes food shortage for herbivores in the wild.

“We have made use of Senna spectabilis species to beautify the cottage and dormitory area — where the earlier safari point started. Now the safari point has been shifted to Melukamanahalli that is 12 kms towards Mysuru. Moreover, wildlife will not feed on the leaf of the tree as it is not palatable for them,” Bandipur Director Natesha told Star of Mysore.

The beautified area includes arches made out of dried Senna spectabilis weed stem, stalk and branches amidst green grass. This gives the tourists the much-needed ‘amidst nature’ feel. Also, ancient idols of Gods and Goddesses, probably discovered inside the forests have been placed at the entrance of the arches. “We want to show the outside world how forest weed has been used to aesthetically transform an open area,” Natesha added.

READ ALSO  Count me in too!!

The area near the flag post and old parking lot have been beautified with lawns, dressed stones and painted blocks. A new wall has been constructed by the side and an informative drawing is displayed that shows the evolution of Bandipur Tiger Reserve from 1941 till 2020. The drawing says that in 1941 it was Venugopala Park with just 90 sq.km of forest.

The credit for the beautification has to go to the Forest Department employees who cut the wood, twisted and bent them to different desired shapes and sizes, varnished and painted the structures. Pieces were pruned, shaped and then laid on the ground to match the drawings on the paper. Once the structure was ready, railings were laid and the wooden pieces were contrast-painted to enhance the beauty of the place. Dry bamboo poles have been used at many places to give the structure sturdiness.

But all tourists who come for safaris cannot see this beauty as the safari point is 12 kms away from the old ticket counter. Some tourists who saw the pergolas said that only those tourists who stay in cottages and dormitories have a chance to see these creations. “Hardly 30 to 35 people stay in the cottages here daily. While the Forest Department has to be complemented as they have used freely available Senna spectabilis weed, I think that if the beauty has to reach far and wide, all safari tourists must be taken here to spend some time,” said Gururaj, who had come to stay in the cottage.