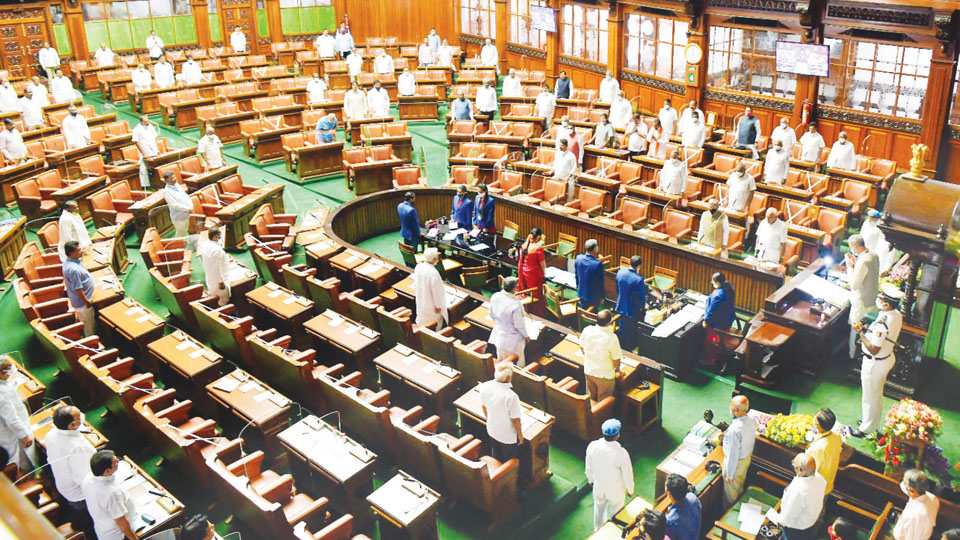 Bedlam in Assembly on first day of Budget Session: Congress opposes ‘One Nation – One Election’

Bengaluru: The Budget Session of the State Assembly, which began this morning with a debate on ‘One Nation – One Election’  became stormy with Opposition Congress members staging dharna in the Well of the House terming it as ‘RSS agenda.’

As the House assembled, Assembly Speaker Visveshwara Hegde Kageri started reading out proposal for ‘One Nation – One Election’ which aims at holding Lok Sabha and Assembly elections simultaneously in order to cut expenditure and save time. At this juncture, Opposition Leader Siddharamaiah sought to know under what rules this subject has been taken up for debate.

Irritated by this, the Speaker said members cannot question action of the Chair, and continued to read.

Siddharamaiah claimed that Prime Minister Narendra Modi’s suggestion of ‘One Nation – One Election’ was nothing but the secret agenda of RSS, which the Congress Party would oppose tooth and nail. This concept was not suitable for a country like India. It was the sinister designs of BJP to destroy the best electoral system that has been in vogue since last 70 years. Following this, Congress members trooped into the Well of the House and started raising slogans.

Amidst slogan-shouting, the Speaker said many eminent personalities including former Presidents, Chief Election Commissioners and learned citizens have favoured holding the elections simultaneously to Lok Sabha and the State Assemblies to save money, time and manpower. This system has been in practice in a few developed nations. Considering advantages in it, the PM has been mooting this idea since 2014 and  wanted detailed deliberations in all State Assemblies.

Kageri said the Congress Party had agreed to participate in two-day deliberation on this topic when it was scheduled to be held in November last year. However, it was postponed due to COVID-19 pandemic. Once new dates were fixed, the Opposition Leader had given the names of 19 members who would speak on the issue. Now, it was not correct on the part of Congress members to disrupt proceedings by staging dharna. “We are not forcing you to accept it. Let all members deliberate on it and share their opinion,” he said.

However, there were no takers for the Speaker’s suggestion as the Congress members continued to raise slogans.

Chief Minister B.S. Yediyurappa said it was timely to change the electoral system by holding Lok Sabha and Assembly elections simultaneously in the interest of country’s economy.

When Bhadravathi Congress MLA, B.K. Sangamesh, removed his shirt in the Well of the House, the Speaker warned him of disciplinary action if he shows disrespect to the House. At that moment, KPCC President D.K. Shivakumar intervened and disciplined him. As Congress members refused to call off dharna, the Speaker adjourned the House for 15 minutes.