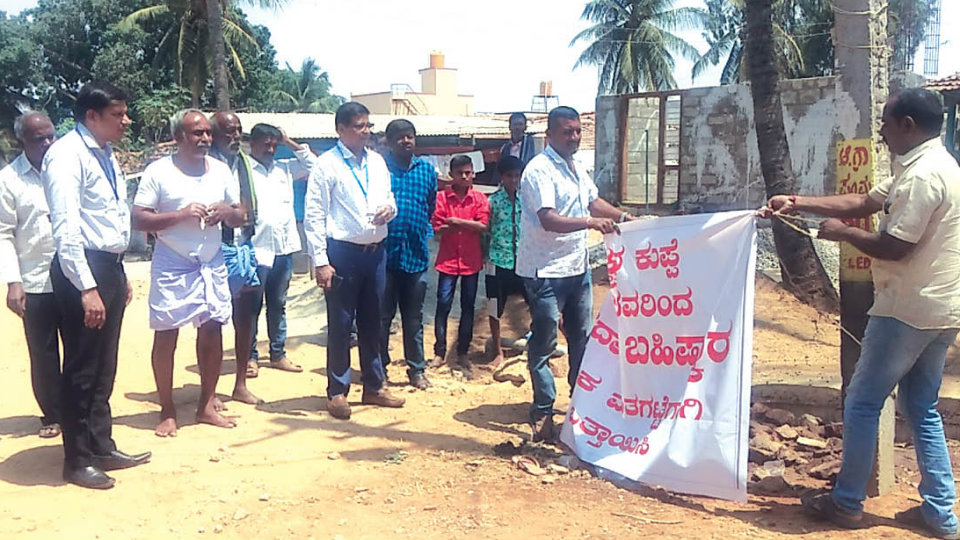 Srirangapatna: Following assurance given by the Assistant Election Officer to arrange vehicle facility for disabled, aged and other helpless people to cast their votes during this LS Polls, villagers of Beechanakuppe of the taluk dropped their poll boycott protest.

It may be recalled here that hundreds of villagers staged protest threatening to boycott the Lok Sabha polls last Friday urging the Taluk Administration to set up a Polling Booth in their village besides ensuring drinking water, toilet and other basic facilities.

Following this protest, a team of officials led by Assistant Election Officer Krishnam Raju and Tahsildar Naga Prashanth visited the village yesterday and heard the grievances from the residents.

Madhu, a resident of the village, alleged that the villagers had to walk 3.5 kilometers to nearest Polling Booth set up at Hosa Unduvadi village during every election to exercise their franchise. Villagers also have to walk to Unduvadi to fetch water as the water tank is also located in that village. Villagers have clashed with Unduvadi villagers over this issue several times. He accused the Taluk Administration has turned blind eye to look into their demands.

He urged the officials to set up a separate Polling Booth as aged, women and physically challenged are finding it difficult to cast their votes. He also alleged many residents failed to vote during the last election as they could not walk to exercise their rights.

Responding to their demands, Krishnam Raju said that he is unable to take steps to open new Polling Booth at this juncture.  However, he assured to provide vehicle facility for aged and specially abled to cast their votes at the nearest Polling Booth.

He said that he would have considered setting up of new Booth if they had approached him before the announcement of Poll Code of Conduct and urged them to drop their protest.

Bowing to the officers’ request, villagers dropped their protest and removed poll boycott posters and banners in the village.