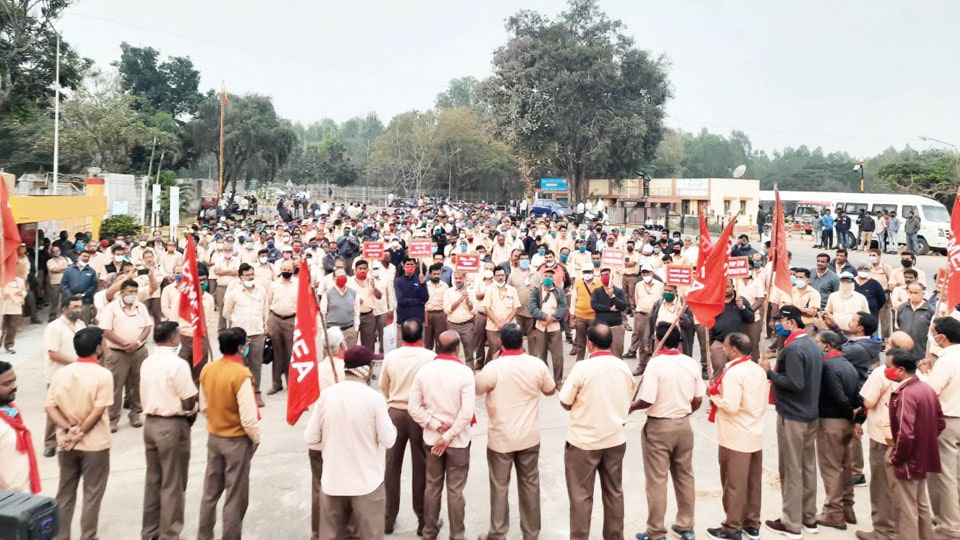 Mysore/Mysuru: Alleging that the Government was out to privatise Defence Public Sector giant BEML (Bharath Earth Movers Limited), employees of BEML in city began their protest in front of the Factory main gate on Hootagalli-KRS Road here yesterday.

As part of the protest, the employees will stage demonstration in front of the main gate for more than 30 minutes every morning for five days.

BEML Employees Association Mysuru President H.Y. Munireddy said that BEML with nearly 8,000 employees (Bengaluru, KGF, Mysuru and Palakad in Kerala units) was making profit since 1964 and has made immense contribution to the defence, mining, Railway and metro sectors.

Pointing out that despite the factory making profits, the Government was planning to privatise this Public Sector Unit (PSU), Munireddy demanded that the company remain as a PSU and urged the Government not to privatise BEML. He further said that BEML apart from paying taxes to the Centre and paying crores of rupees in the form of profits was also paying dividends to shareholders every year besides contributing for the progress of the country.

Munireddy said that BEML Mysuru unit was started in 1984 on a 700 acre plot and has truck, engine and aerospace manufacturing units and added that the Employees Unions have been protesting since 2017. He alleged that despite strong opposition from the employees, the Union Government has stuck to its stand of selling a portion of stake to the private company in the name of disinvestment.

It may be recalled that BEML employees have been staging protests against the privatisation move by the Union Government since many years and had also staged protests in Delhi besides submitting memorandums to elected representatives urging them to convince the Union Government to drop the plans of privatising BEML.