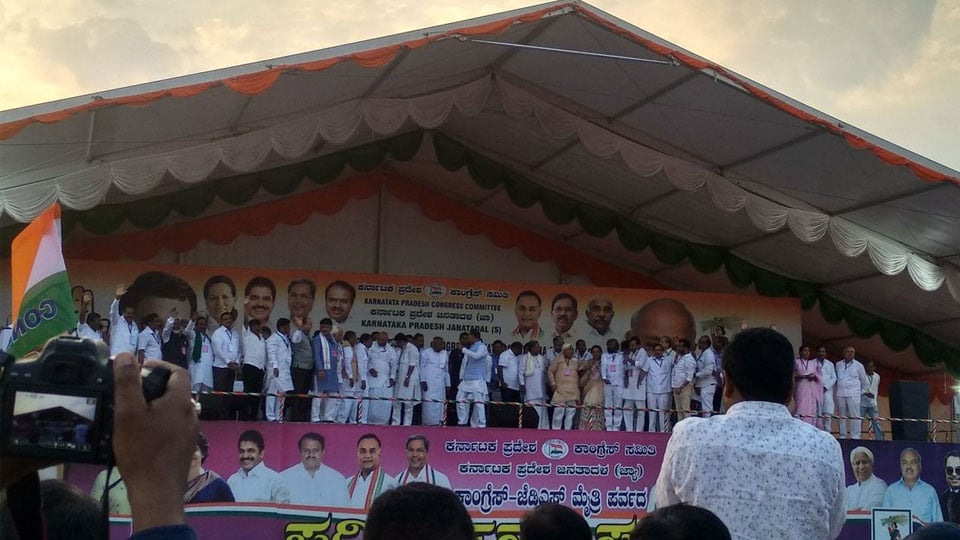 Bengaluru: With little more than two weeks to go for the first phase of polling for Lok Sabha elections in Karnataka, the Congress and JD(S) will hold a joint rally this evening at Bangalore International Exhibition Centre grounds on the outskirts of Bengaluru. The coalition partners are set to blow the poll bugle jointly to send out a message: “We are united.”

Titled “Parivartana Samavesha,” this will be the first rally jointly organised by the Congress and JD(S) after the combine came to power in Karnataka last year. Congress President Rahul Gandhi and JD(S) Supremo H.D. Deve Gowda will share the stage at the rally scheduled at 5.30 pm.

Sources say, the crowd could be over five lakh strong.

Rahul, who is scheduled to address Congress rallies in Vijayawada and Ananthpur in Andhra Pradesh, will fly down to Bengaluru at 4.15 pm.

Bengaluru has been chosen to launch the poll campaign to reach out to electorates in four Lok Sabha constituencies — Bengaluru North, South, Central and Rural. An 80×40 platform has been erected to accommodate over 50 leaders of both parties. Seating arrangements have been made for second rung leaders, including MLAs and Ministers on either side of the dais.

Seating arrangements have been created for over one lakh people. Besides this, over 3 lakh people can stand in the grounds near International Exhibition Centre, reports said. Last afternoon, CM Kumaraswamy and his team personally visited the spot and took stock of the elaborate arrangements made there.

“This will be the first joint campaign by Congress and JD(S).Tomorrow’s meeting is historic as it will send a clear message to the people of the country from Karnataka for Lok Sabha polls,” Kumaraswamy told reporters             in Bengaluru.