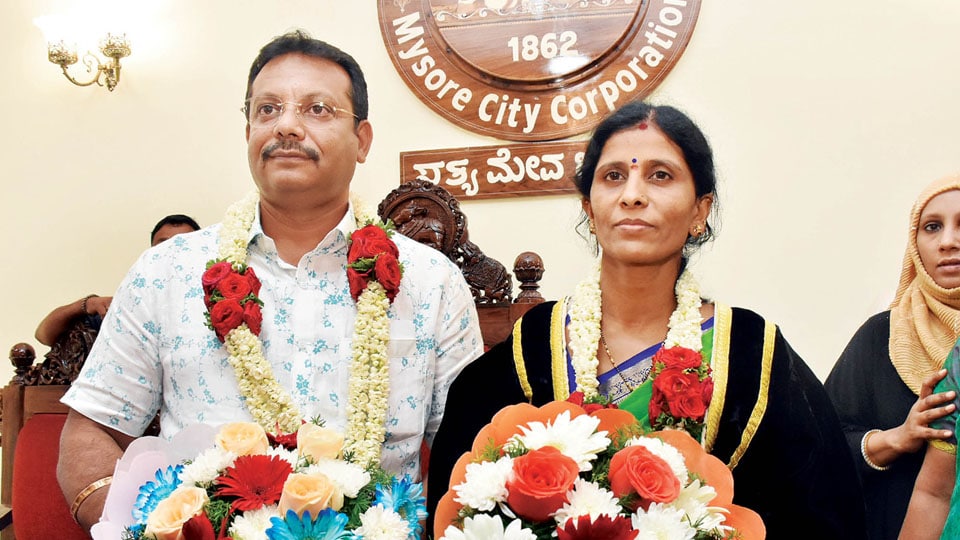 Mysore/Mysuru: Despite tough talk by former Chief Minister and JD(S) leader H.D. Kumaraswamy that Congress leader and former CM Siddharamaiah was responsible for a break in the power-sharing alliance between the two parties in the Mysuru City Corporation (MCC), the JD(S) stuck to its alliance partner Congress in the Mayoral polls held at Nalwadi Krishnaraja Hall this morning.

Corporators Ayub Khan and Arif Hussain remained neutral when the voting for Mayor’s post took place and as such Rukmini got 43 votes instead of 45. But Ayub Khan and Arif Hussain voted for Baig and Corporator Sridhar went out of the hall when the voting for Deputy Mayor’s post took place. As such, Baig got 44 votes instead of 45.

The hung 65-member MCC has 22 members from the BJP, 19 from Congress and 18 from JD(S), besides one BSP member and five Independents. BJP MP Pratap Simha and MLAs S.A. Ramdas and L. Nagendra, JD(S) MLCs K.T. Srikantegowda and Marithibbegowda, Congress MLA Tanveer Sait and MLC R. Dharmasena voted in today’s election. JD(S) MLA G.T. Devegowda and MLC Sandesh Nagaraj were conspicuous by their absence.

Though it was officially announced by Kumaraswamy that the alliance with Congress was over, local leaders of the JD(S) and Congress held separate meetings and decided to keep the alliance and deny power to the BJP.

Sources said that five JD(S) Corporators from minority community led by Abdullah, the party’s candidate for NR Assembly Constituency in the last elections, were opposed to the party aligning with BJP. They feared that an alliance with the BJP will hit the party’s electoral prospects in minority-dominated areas.

The Government has appointed Shilpa Nag as MCC Commissioner after transferring Gurudatta Hegde. She took charge on Feb. 22 but was not present at the MCC as she had additional work. She was present today during the voting. It may be recalled MCC Commissioner Shilpa Nag, an IAS Officer, had gone on a year long leave to take care of her child.

Although Shilpa Nag had applied for a two-year leave, the Department of Personnel and Administrative Reforms had sanctioned her 365 days leave from July 26, 2019 to July 24, 2020, as per the provisions in the All India Service Cadre (leave) rules.

Shilpa Nag, who was serving as SIRD (State Institute of Rural Development) Director in the city was posted as MCC Commissioner ahead of the Lok Sabha polls and she took charge of the civic body on Feb. 17, 2019.

Now she is back at MCC replacing Gurudatta Hegde as Commissioner.