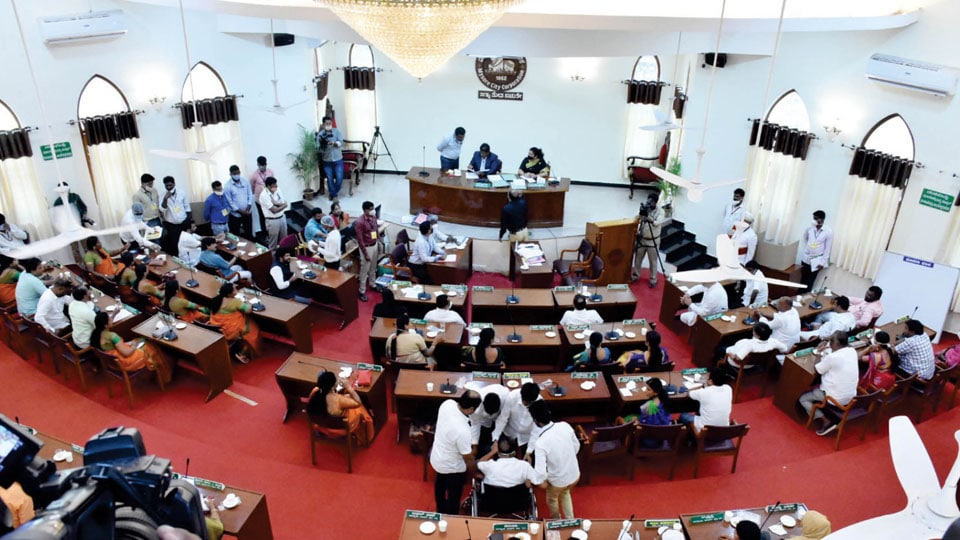 Mysore/Mysuru: Ahead of the city of Mysuru voting to elect its 23rd Mayor and Deputy Mayor, it was clear that the contest is a one-on-one fight between the Bharatiya Janata Party (BJP) and the Congress while the Janata Dal (Secular) is taking a ‘wait and watch’ approach, hoping to be the ‘King Maker’.

The previous Mayoral term, of JD(S)’s Tasneem, ended on Jan. 19. The agreement reached between the Congress and the JD(S) in 2018 made the JD(S) to support the Congress to keep the BJP out of power despite BJP having maximum seats. Now the situation has changes and both the parties are engaged in a cold war.

Though all the three parties — BJP, Congress and JD(S) — have been claiming till now that they will win the Mayor’s post if an alliance is worked out and the alliance arithmetic was favourable to them, in a swift political development late last night, the three parties decided to put up their own candidates for the posts of Mayor and Deputy Mayor, forgetting the alliance talks. With the late development, it looked like no party will attain power in the Corporation and any talks of an alliance would be a failure.

Late last night, JD(S) leader and MLA S.R. Mahesh told Star of Mysore that the JD(S) patriarch and former Prime Minister H.D. Deve Gowda was against an alliance with the BJP and there is no inclination of the party to continue the alliance with the Congress.

The JD(S) is reportedly eyeing the Mayoral post, which is why party leaders have not really committed to both the BJP and the Congress.“No Congress leader has approached us till the last moment and our leader Deve Gowda is against an alliance with BJP. We have decided to field our own candidate for Mayor and Deputy Mayor’s posts,” he said.

On the other hand, MLA Tanveer Sait had said yesterday that the Congress-JD(S) alliance would continue and as per the agreement with the JD(S), Congress has to get the Mayor’s post. “We will give away the Deputy Mayor’s post to JD(S).

The BJP too was hoping for an alliance with the JD(S) till the last moment. “We have already spoken with JD(S) leaders in this regard. The JD(S) will definitely support the BJP in the Mayor election,” BJP MLA L. Nagendra said, exuding confidence of getting support from the JD(S).

JD(S) State President H.D. Kumaraswamy, who is staying at a resort in Mysuru, had a closed-door meeting with Mysuru District Minister and BJP leader S.T. Somashekar on the possible alliance between the two parties.

Not making his strategy public, Somashekar was cryptic in his answers to the queries of reporters. “In politics there has always been the relationship of give and take. We have not treated the JD(S) badly in any situation and we have a lot of mutual respect,” he said.

Chief Minister B.S. Yediyurappa too had spoken to Kumaraswamy over phone and sought an alliance in MCC. Though Yediyurappa had sought the post of Mayor for BJP, Kumaraswamy did not commit to saffron party.

READ ALSO  Pourakarmikas want ordinance to cover them too

After the meeting with Somashekar, Kumaraswamy met Tanveer Sait who was waiting at the resort since a long time. Both held a meeting and S.R. Mahesh too was present. But till late in the night, there was no clear-cut direction from the JD(S) though the party has issued a whip to all its MLAs and Corporators.