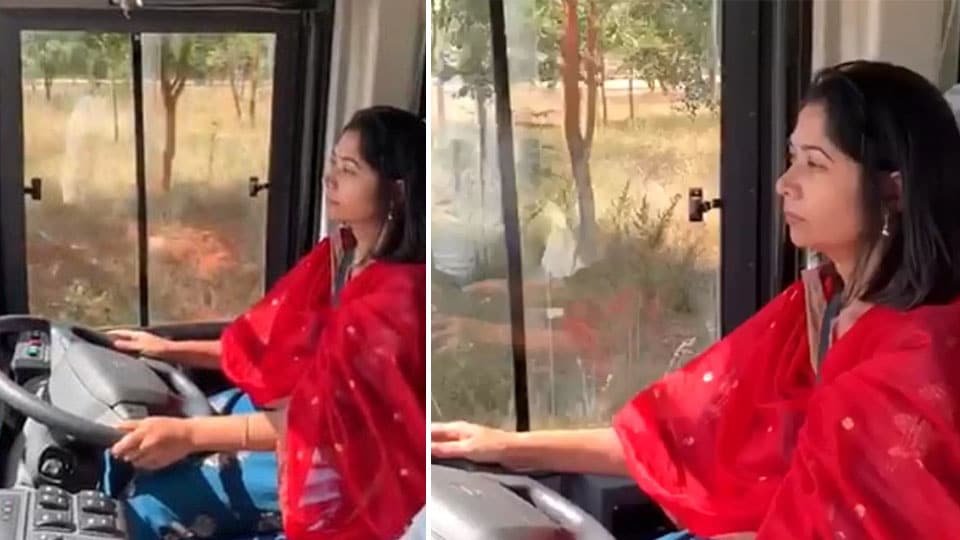 Bengaluru: Thousands of employees of Bangalore Metropolitan Transport Corporation (BMTC) were charmed by Managing Director  C. Shikha on Tuesday, after a video of her test-driving a Volvo bus went viral. Shikha had served as the Deputy Commissioner of Mysuru for three-and-a-half-years and was transferred on Aug. 10, 2016.

Shikha is the first IAS officer in recent times to have inspected a bus by getting behind the wheels. A visibly confident Shikha, accompanied by senior officials of the Corporation, drove the vehicle on the test track at the Hoskote Training Centre on Saturday.

Her driving skills not only got an overwhelming response from the utility’s male-dominated workforce but also brought a smile to Prema Ramappa Nadapatti, its lone woman driver. BMTC, with a daily ridership of 36 lakh, has 6,400 buses and employs around 14,000 drivers. On the job for more than a decade, Prema says bus drivers face several challenges, including traffic congestion and rash riding by two-wheelers. She drives on the Kempegowda Bus Station-Begur route.

Shikha, a 2004 IAS officer, took charge as BMTC MD in September 2019. Her test drive came after a series of brake failures which led to accidents. Though a few netizens took pot-shots at her by seeking to know if she possessed a licence, many were impressed with her for daring to test vehicles before making any purchases.

She told reporters, “I just wanted to get a feel of public transport and also experience the feeling of driving a Volvo. More women staffers should come forward to drive Volvo buses. I was doing a quality check as we are in the process of procuring these buses.”

A BMTC spokesperson in a statement said, “The vehicle was driven at the bus training centre… in a controlled environment. No harm was caused to the public,” adding that Shikha has a learner’s licence for heavy vehicles. At Volvo’s manufacturing unit in Hoskote, a test driving track is provided for customers to test drive and experience its buses under the supervision of a qualified driver. Officials said she did it to perform a quality check as BMTC is in the process of procuring these buses and the initiative has also inspired women, especially those within BMTC.