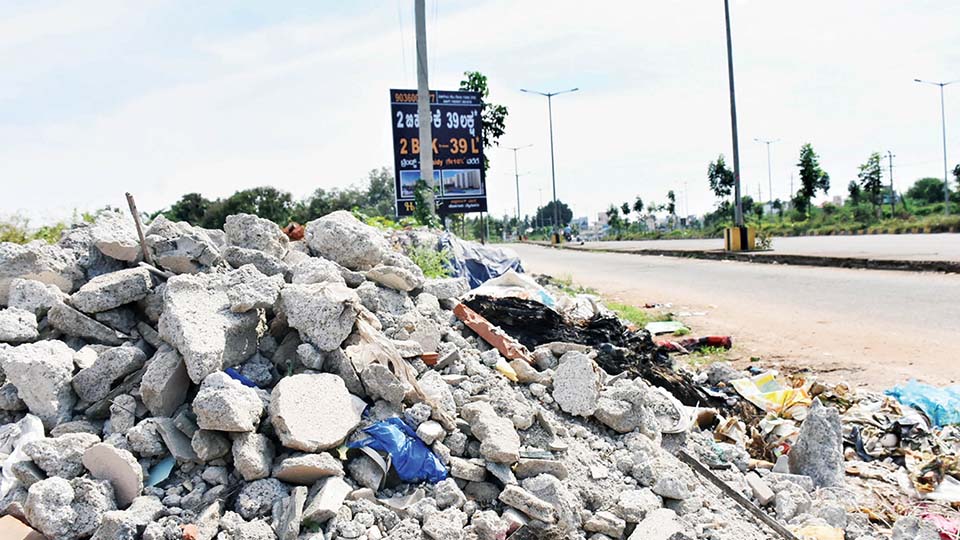 Mysuru: Think before you dump trash or building debris on Ring Road. Closed Circuit Television (CCTV) cameras will catch your image while dumping garbage and you will be made to cough up fine.

Tired with dumping of all kinds of garbage, debris and trash on Ring Road in city, Mysuru Urban Development Authority (MUDA) has decided to punish those who dirty the Ring Road despite warning.

People can also record in their mobile phones if any person or vehicle is found dumping building debris on the Ring Road and WhatsApp to 88840-00750.

Based on video or photograph, the MUDA will not only take action against those persons but will also confiscate vehicles used to dump the garbage.

MUDA Chairman H.V. Rajeev said while Mysuru has been declared as the cleanest city in the country by various agencies, the miscreants were dumping building debris, trash, garbage on both sides of the Ring Road marring the beauty of the city.

“We have identified 13 places as ‘hotspots’ where garbage is dumped. Besides, there are 30 places where building debris and other waste materials are dumped. The existing garbage lying on both sides of the Ring Road will be cleared before Nov. 28. Thereafter, dumping of any kind of garbage is strictly banned,” he added.

The citizens must join hands with the MUDA by clicking photographs or taking video of vehicles dumping the debris and send it Mob: 88840-00750 to initiate action against the concerned.

Streetlights on the Ring Road are not maintained properly and this makes it easy for the people to dump debris and trash under the cover of darkness. The MCC (or is it the MUDA?) has not bothered to upkeep streetlights despite several pleas from people residing on either sides of the Ring Road. They say trucks carrying debris will come after dark and dump due to absence of vigilance by the  authorities concerned. This has marred the beauty of the city. It was high time, the authorities made the streetlights functional and step up vigilance to punish debris dumpers, residents said.