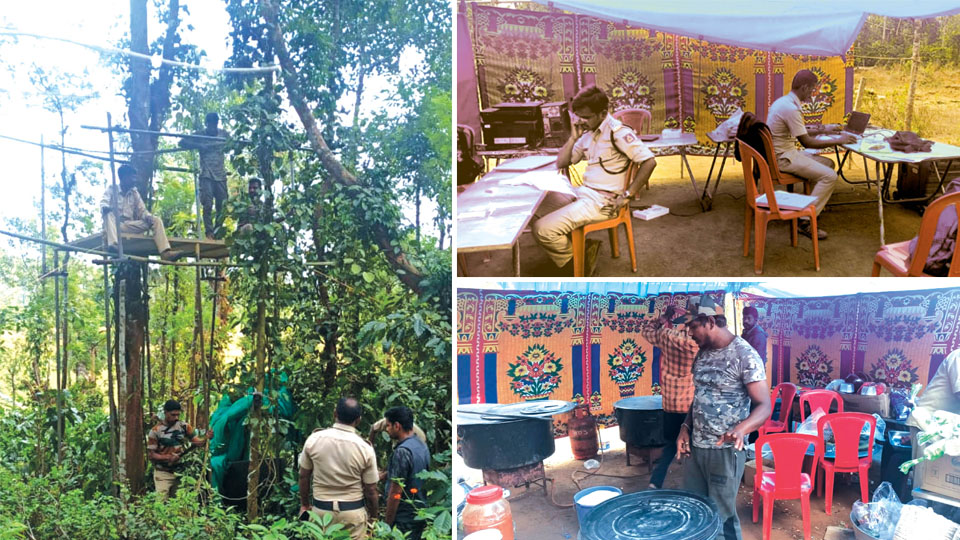 Ponnampet: The operation launched by the Forest Department to trap the elusive tiger that has spread terror in parts of South Kodagu has so far proven futile. At the same time, killing of cattle heads have continued and the latest killing was reported from Bellur where a Jersey breed cow became a prey to the big cat. Though the tiger had killed the cow, it had not eaten the carcass.

This particular tiger has been on the prowl in T. Shettigeri, Srimangala, Bellur, West Nemmale, Thavalageri and surrounding areas. The Jersey cow, owned by Bachiraniyanda Raghu, was killed just a kilometre from the house of Machamada Jeevan Bopanna at Thavalageri where the tiger had killed a calf on Monday night.

The attempts by the Forest Department to capture the big cat have yielded no results so far. But the tiger has been spotted near Birunani on the Hysodlur-Badagarakeri Road on Tuesday and the local residents spotted it crossing the road. It was also spotted roaming near Porad village. Yesterday, the fully-grown tiger was sighted at Guttukolli near Thavalageri. From Saturday last, the tiger has killed a teenager and a 60-year-old woman and has also killed four cattle heads and a calf.  Residents say that there are two tigers on the prowl near Birunani and Thavalageri area as the villages are at least 15 kilometres apart. The Department officials and staff have set up mini camps near T. Shettigeri and are patrolling adjoining areas.

Temporary watch-towers where guards sit all day and night have been constructed amidst coffee estates to keep a watch on the tiger’s movements. Advanced night-vision binoculars are being used in the operation. Sharp-shooters have been summoned to lead the operation quickly in case the tiger is sighted. They too are joining the surveillance and patrol teams.

More than 150 personnel from various ranks of the Department are camping at the villages and food is being cooked at the tent houses. Cameras have been set up inside the estates on the route the tiger has taken before and near the places where the killings have occurred.

In the camps, sections have been created to monitor the camera footages and officers take turns to scan the visuals recorded with computers and laptops.

Meanwhile, representatives from Kodagu Growers’ Association met Forest officials who are involved in the operation at T. Shettigeri village yesterday and told the Department staff that people were scared to venture out of the houses in this peak coffee-picking season where along with coffee-picking, tree trimming and sprinkler works too are undertaken.

They urged the authorities to close schools and Anganwadi Kendras in the tiger operation areas till the big cat is captured. In case there is requirement of manpower and technical support for the operation, the head office in Bengaluru would be informed, assured officers.

The Rajya Raitha Sangha Kodagu District President Kadyamada Manu Somaiah has urged the Forest Minister to visit the district and allow the people to shoot down man-eater tigers.

Addressing reporters at Inspection Bungalow in Ponnampet yesterday, he said that even after conducting many operations, the Forest Department has failed to capture the tiger.

Tiger pugmarks have been found in various parts of South Kodagu and people were terrorised. He threatened to call for Kodagu bandh if the tigers on the prowl are not captured. “The Minister should conduct a meeting with high-level officers and take measures to control the tiger menace. If the meeting is not held within a week, the Raitha Sangha will give a call for Kodagu Bandh,” he warned.