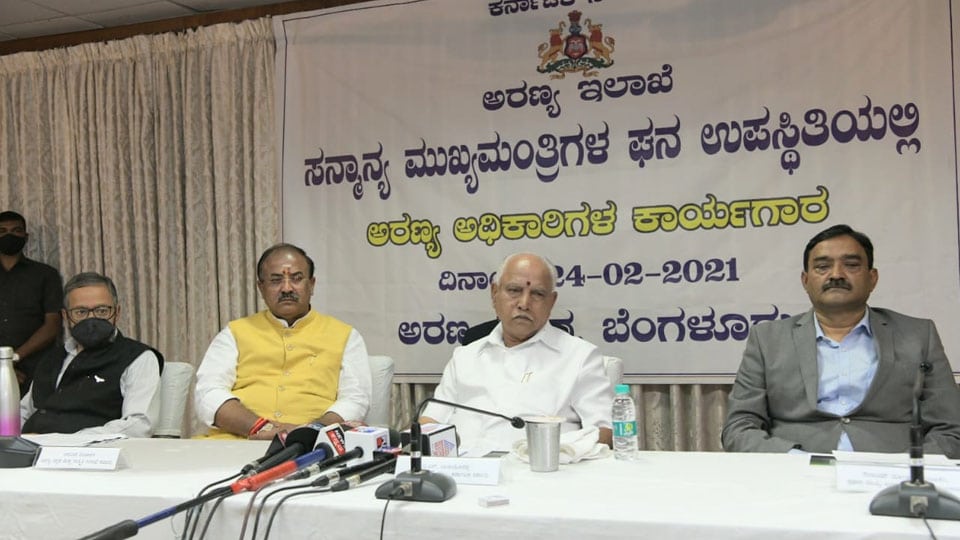 Bengaluru: Chief Minister B.S. Yediyurappa yesterday urged Forest officials to develop cordial relationship with tribals and farmers as he asked them to make all efforts to increase the State’s green cover from the current about 22 to the targeted 33 percent.

He was speaking at a meeting with the heads of the Forest Department, where officials from all the 13 circles were present. The Government has given priority for forest conservation. “I appeal to forest officials to have a cordial relationship with tribals and farmers in the forest. With their cooperation you will have to protect the forests,” Yediyurappa said.

Without the cooperation of the people there, forest cover cannot be increased or can it be conserved, he pointed out. “I have been made aware of several financial issues. The Government will make an honest effort to address any requirement with regard to funds. You have the big responsibility of conservation and we are with you,” he said.

Stressing the importance of Western Ghats for Karnataka, he said 51 personnel from the Department have lost life while on duty. “You have the responsibility of protecting the nation’s wealth. I request you to develop harmony with farmers and tribal communities. Without their cooperation, we can’t take up conservation work,” he said.

Gathering information from officials that the green cover in the State has increased from 18 to about 22 percent now, and the target is to increase it to 33 percent, the CM asked them to strive towards it. “Make all efforts, if we reach 33 percent, it will be a great achievement and will be a model for the country.”

The Department flagged several issues to the CM with regard to illegal mining, rising man-animal conflict and delay in release of funds.

Principal Chief Conservator of Forests (Wildlife) Vijaykumar Gogi said that the Department believes that erecting a railway barricade of 500 km can put an effective check on the elephant menace. The present barricade of 175 km has played a major role in controlling the number of elephant conflicts. “Till then, we are dependent on trenches and solar fences,” he said.

Limbavali told the CM that he will take a delegation to New Delhi to request release of CAMPA (Compensatory Afforestation Fund Management and Planning Authority) funds for erecting railway barricades.