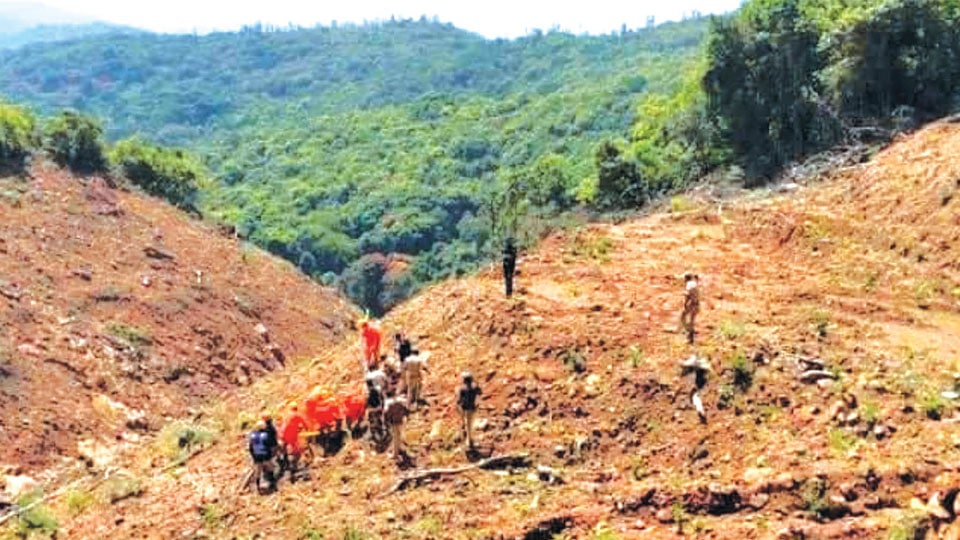 Madikeri: The Kodagu District Administration, along with National Disaster Response Force (NDRF) and emergency teams, recently conducted a mock rescue operation at Gajagiri Hill in Talacauvery towards getting acquainted with adverse situations during landslides and floods.

Two houses at the foot of Gajagiri Hill with its five residents, including the Chief Priest of the Talacauvery Temple, were swept away and vast swathes of coffee plantations were buried under the debris on Aug. 5 last year.

According to an official release here, the demonstration was held under the guidance of the District Administration and State Disaster Management unit, in the presence of Deputy Commissioner (DC) Charulata Somal, Superintendent of Police (SP) Kshama Mishra and Assistant Commissioner Eshwar Kumar.

Demonstrations were done on shifting people from the Hill to a safe place through rope, providing first-aid, translocating affected people to the relief centre and so on.

Speaking on the occasion, DC Charulata Somal said that the District Administration has made all preparations to face natural calamities in Kodagu. Demonstrations were conducted in the regions prone to landslides and floods, so as to create awareness among the people, she added.

Officials discussed measures to be taken during monsoon, like shifting residents from danger zones, constituting and co-ordinating with local-level Disaster Management Committees.

SP Kshama Mishra said that the Police will coordinate with other rescue teams in handling the situations efficiently.

People in and around Talacauvery witnessed the mock rescue operations. The rescue personnel provided information to the people on the usage of rescue materials.