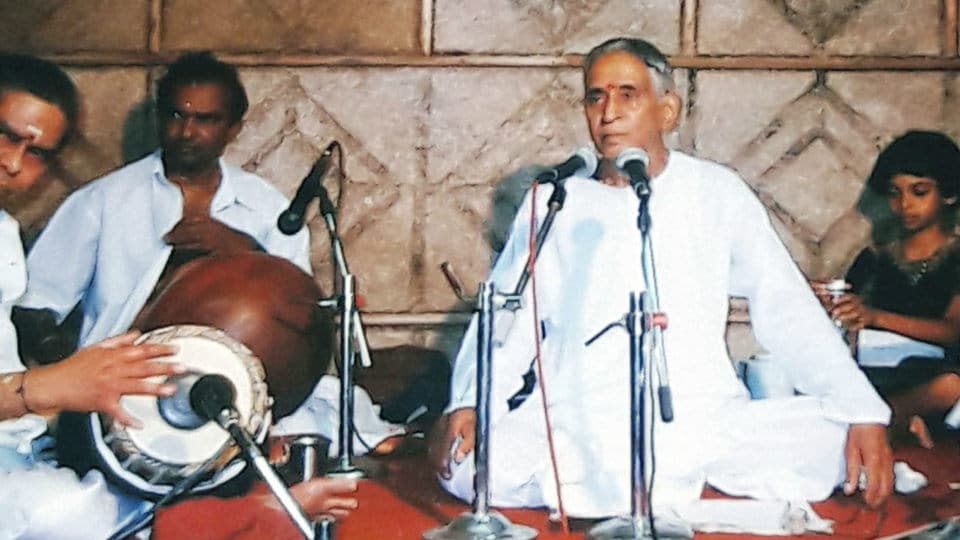 As part of the Birth Centenary Celebrations of Chitrakala Nipuna Vid. R. Seetaram of Mysore Brothers-fame (July 2017 – July 2018), a paintings exhibition has been organised on Aug. 12 and a music concert on Aug. 19 at Sri Prasanna Venkataramana Swamy temple, Old Bandikeri Road, K.R. Mohalla.

The painting expo will be open for public from 11 am onwards on Aug. 12. Mysore Art Gallery President and sculptor L. Shivalingappa will formally inaugurate the expo at 4 pm.

On Aug. 19 (Saturday), Vidu. Dr. Sukanya Prabhakar and party will present a music concert at 6 pm as part of the centenary of the unique ‘artist musician and  musician artiste.’

Profile: Chitrakala Nipuna Sangita Vidwan Sitaram, a multi-faceted legendary musician-cum-artist was born on July 8, 1918. He was initiated into music by his mother Vidu. Varalakshmi and grew up listening to Veene Seshanna along with Primary School classmate Swara Murthy, his grandson.

Later trained by Asthan Vidwans, Veene Shivaramiah and A.S. Shivarudrappa, he was inspired and encouraged by the stalwarts in the field of music by Mysore Vasudevacharya, Tiger Varadachar, Arikudi Ramanuja Iyengar and in art by Tankasale, Y.S. Raju, Keshaviah, Sculpture by German instructor Mr. Doring  and above all with an innate passion for Music as well as Art, influenced in childhood by art and artists of Royal Mysore Palace.

From left: Mysore Brothers — Mahamahopadhyaya Dr. R. Sathyanarayana, R. Seetaram, eldest brother R. Chandrashekharaiah, youngest of them Prof. R. Vishveshwaran — with their mother Varalakshmi Ramaiah (in whose name and dedication they established the first premier music academy ‘Sri Varalakshmi Academy of Fine Arts’). Their only sister R. Subbulakshmi, who was also a renowned musician and music guru, is not seen in this picture which was taken in front of their old home in Kashipati Agrahara on Chamaraja Double Road, known as 100 feet Road in those times.

With the inaugural concert in Dr. M.V. Gopalaswamy’s Radio at Vontikoppal, Mysore, in 1937 and then onwards in Radio Akashavani, he travelled widely along the length and breadth of the country, giving concerts as well as paintings show. He carved a special place for himself by not only excelling in both the fields but by bringing the Fine Arts together as music reflected in many of his paintings and winning record-breaking seven times first prizes in Mysore Dasara Exhibitions, won Lalitakala Academy Award in 1994 and was honoured with many awards such as MTV Acharya Award, Gayana Samaja Best Musician of the Year  and ‘Kalajyothi’ from Nadajyothi Sri Thyagaraja Swamy Bhajan Sabha etc. in both the fields. His paintings, especially that of Jagadguru Shankaracharya, Sadguru Thyagaraja, Trimurthys, portraits, landscapes and compositions, etc. not only adorned the cover pages of many popular magazines such as Sudha, Karmaveera, Utthana, they have also been presented to Shringeri Jagadguru, Vid. Karikudi Veene Shambhashiva Iyer, Vid. Mysore Chowdiah, Vidu. Gangubai Hangal and many admirers. With his kacheri at Ananya on May 25, 2000, he scaled new heights at the age of 82 years and in art, created historic pencil sketches in Srirangapatna during his morning-evening walks! His paintings adorn Rashtrapathi Bhavan, Jaganmohan Palace and many places, both in the country and abroad. His unique collection of rare Varnas and Kritis since his childhood, which he wrote down in his beautiful manuscript for the future generations, will be dedicated to the coming generations.