Home » Columns » BJP approach to cattle trading will hurt the economy; but who cares since the idea is to create vote banks 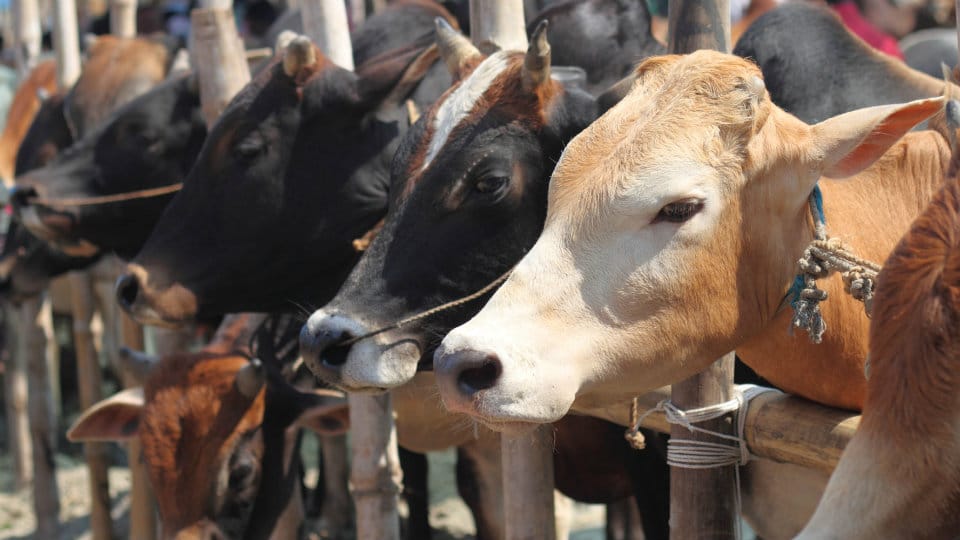 BJP approach to cattle trading will hurt the economy; but who cares since the idea is to create vote banks

It’s clear: The cow dominates India. The world is changing in radical ways and life-and-death issues confront our country — GST’s impact on everyday life, the ‘dirty war’ in Kashmir, rising attacks on women, crisis in the IT industry, tensions with China. But none of them gets the national attention the cow gets. It is as though the country is meant only for cow worshippers and cow eaters. Religion is the key here as it is in all policy matters nowadays.

(Before we go any further, it is important for this writer to make what is called a disclaimer. I do not eat meat. Of any kind. Can’t even stand the sight of it dangling from hooks in wayside stalls. In school days I was in love with Lakshmi, one of three cows in the family shed. She was a real beauty, plump and wholesome and shining deep brown and aglow with a smile, I thought, when she saw me. No one worshipped her, except me, only that my worship was that of a lover).

The most important thing we should know about today’s cow debate is that it is not rational. It is emotional and political. This is because the BJP in power believes that it can alter the country’s DNA. Remember that legislation for cow protection need not be aggressive. The Karnataka  Prevention of Cow Slaughter and Cattle Preservation Act, is dated 1964, when Congress stalwart Kengal Hanumanthaiah was the Chief Minister. Note that it specified cow, without hiding behind terms like cattle as now.

The BJP has given the issue a combative, party-oriented twist. This comes through  disastrously in the violence unleashed by cow rowdies: Lynching a citizen on mere suspicion, flogging Dalits who skinned dead cattle as per tradition, beating to death a dairy farmer taking his cows home, an activist attacking a student in IIT-Madras for eating beef.  That such crimes are committed before cameras and then publicised, shows that the criminals are sure of support from law-enforcers. On the record so far, they are right.

No wonder that reason has no chance and partisan emotionalism wins the day. Historian D.N. Jha’s 2001 book Holy Cow: Beef in Indian Dietary Traditions was a scholarly study. But even before it was out, Hindutva forces declared war. The Government banned the book and the author, facing death threats, was obliged to take Police protection. Jha had merely quoted chapter and verse to show that Hindus ate beef in the past.

With the same belligerence with which they attack the facts of the past, communal partisans reject the realities of the present. The economics of cattle farming are of existential importance to India. Farmers who rear cattle must have the facility to sell them at will, hence the thousands of cattle markets in the country.

A productive cow (useful in agriculture and dairy work) can get half-a-lakh of rupees in the market. Once productivity stops, the bovines have no value except in the meat market. To deny this is to hit  farmers below the belt.

Farmers who cannot sell cattle profitably, will stop rearing cattle (providing 20 kg of fodder to an animal means  Rs. 150 a day to the farmer.)  At the same time, the population of stray cattle will increase. This is already visible in Maharashtra and Haryana where the BJP has banned beef. There are no organisations with the ability and the willingness to run goshalas for the tens of thousands of cows that roam shelterless. And what of the industries dependent on various parts of cattle — skin (India’s leather exports earn $6 billion a year), bone, horns, tail-hair, blood? And the employment given to traders, middlemen, transporters, tanners, cooks? From no angle relevant to the progress of a nation is a cattle trading  ban justified.

READ ALSO  My encounter with a Beefeater !

It is not justified even from the point of view of Hindus en masse; many non-Brahmin Hindus are meat eaters. Just as many non-Hindus are vegetarian.

Wouldn’t a national programme to promote vegetarianism have been wiser than an arbitrary ban on traditional cattle business? Given the increasing popularity of vegetarian diets across the world, India could play a leadership role in such a programme as it did in the case of Yoga. That would have indirectly led to cow protection as well. Such constructive thinking can of course, have no scope if the intention is to divide people and create vote banks. The cow has been reduced to a political tool — an insult to its holiness.

4 COMMENTS ON THIS POST To “BJP approach to cattle trading will hurt the economy; but who cares since the idea is to create vote banks”