Home » Columns » Abracadabra By K. B. Ganapathy » BJP as a political party treats its members with dignity 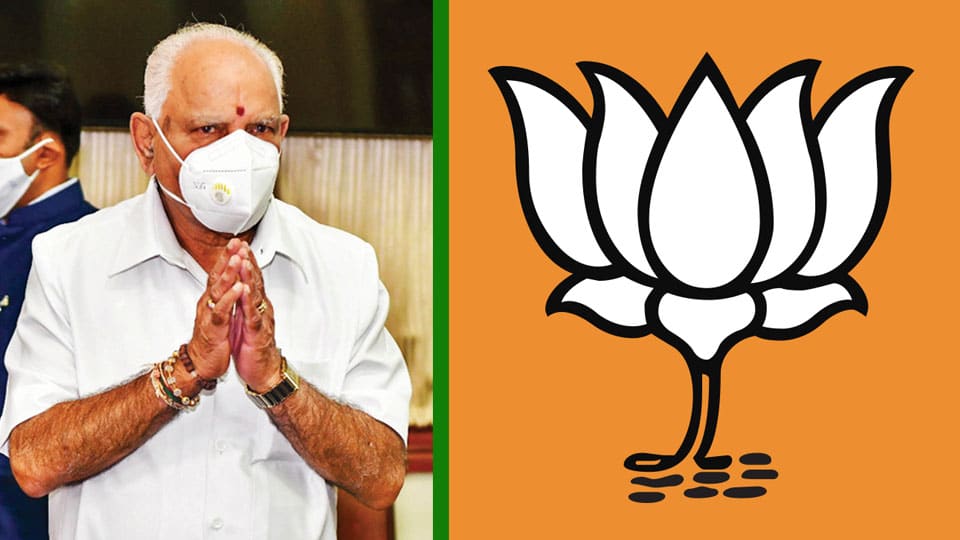 BJP as a political party treats its members with dignity

History tells us like life, power is not for ever. The resignation of B.S. Yediyurappa as the Chief Minister of Karnataka yesterday was unfortunate for a politician who worked like a bull to build the party from the day he joined RSS. Though a staunch Hindu, he was never a fanatic much less a fundamentalist.

It was only a hop, step and jump to politics with the blessings of RSS and as expected, tasted success from the lowest local body to the highest State Assembly. That he could keep the disparate elected MLAs belonging to different castes, creed and religion of his party, BJP, together for so long is no mean achievement.

Naturally, the BJP High Command too was noble enough to recognise his service to the party and reward him from time to time, in BJP’s times of low and times of high. He was not ignored or sidelined for the position BJP had in its power. I do not agree that there was none whom the BJP could have projected as its State leader, irrespective of the caste factor. Didn’t BJP make A.K. Subbaiah, the State President? He belonged to Kodava community whose population is just one-and-a-half lakh, and came to get 18 MLAs in 1983. Of course, this success made him over-confident so much so, he began speaking in a way ‘after me the deluge’ about RSS and the BJP. But people of Karnataka know what happened to BJP and Subbaiah with Yediyurappa too facing the same situation when he quit BJP, formed his own party (KJP) because of over-confidence born out of 17% Lingayat vote bank, but lost.

Of course, BJP could not make it because of marginal loss of votes in many Constituencies to its candidates. That loss was due to Yediyurappa’s party candidates. But soon Yediyurappa made a home-coming and since then, except for the period of 2013-2018 when Congress under Siddharamaiah came to power and surprisingly Siddharamaiah lasted a full 5-year term. BJP had had a good period and as a Chief Minister to Yediyurappa too. Look at this:

READ ALSO  The Public and The Police

However, if the BJP High Command could be noble enough to reward Yediyurappa, in spite of the party’s self-imposed rule of age factor to hold the political office, by allowing him to hold the office of the Chief Minister even when he had completed 75 years (age-bar) at the time he took over as CM in 2019, the BJP High Command could have shown the same noble quality, as a special case, to complete that tail-ender period of about two years with a great ceremonious send-off, in front of the Vidhana Soudha, following the example of the Congress!

Thank God, BJP did not ‘sack’ Yediyurappa in a humiliating manner like Congress did with Andhra Chief Minister T. Anjaiah or Veerendra Patil of Karnataka. Remember? But BJP treats its leaders with dignity.

Since the days of democracy in City States of Greece, especially Athens, Democracy has never been a Government of the people, by the people and for the people. The question arises who in fact decides what is good for the people (the State) and what is not. Individuals in the Government holding highest office, mercifully, till the next election. Where is the collective or majority decision, both in times of war and peace? History is replete with examples where poor leadership has led nations to war and the good leadership won the war.

Take Britain during the II World War. And Bertrand Russell, the British Philosopher, Mathematician and Nobel Laureate says World War I was essentially egotistical — not for the good of countries who participated. It was intended to satisfy somebody’s ego.

Democracy is a shadow of a few individuals who hold real power once elected. It is an act of tight rope walking for the contestant, but once he wins, he is the hero, leader, all powerful. He decides or manipulates the system to suit his needs. We see this happening in our own city; imagine then the State and the country?

But, we must not forget that Democracy is the only form of Government that is good compared to all other forms of Governments — one party Government (Communist), Military rule, Dictatorship, Dynastic or Monarchy. In Democracy, we have at least the choice (or opportunity) to change the Government after a few years — four years or five years or six years whatever. Some hope of getting a better Government.

It is because of Democracy we have a new Government at Delhi and in our State and in other States of our country, no matter to which party they belong.