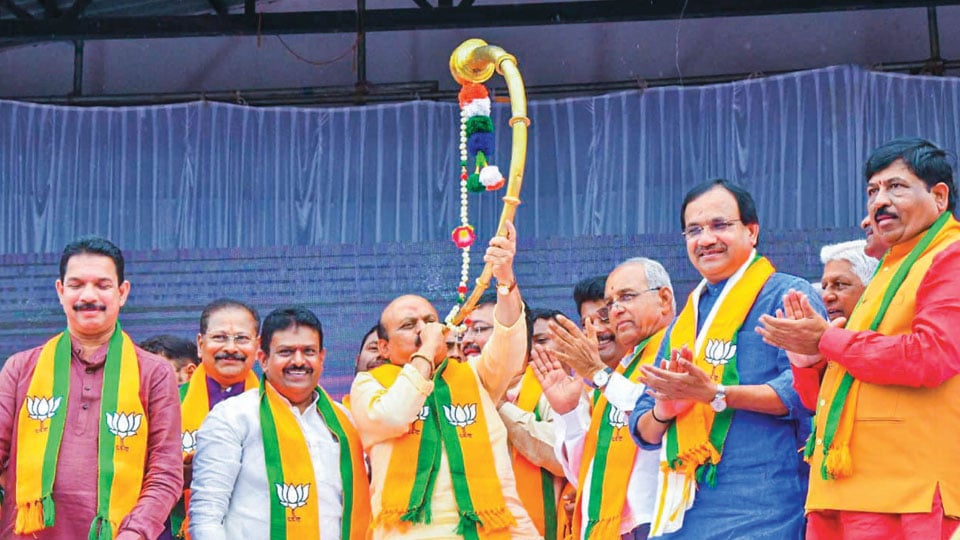 Mysore/Mysuru: With an eye on the upcoming Legislative Council Polls from Local Authorities Constituencies scheduled to take place on Dec.10, the ruling BJP will be conducting a ‘Janaswaraj’ Yatra (Rally) in city tomorrow (Nov.20) as part of the poll campaign for the MLC polls from the duel member Mysuru-Chamarajanagar Constituency.

Announcing this at a press meet at the BJP Office here on Thursday, District BJP President Mangala Somashekar said that Minister K.S. Eshwarappa will inaugurate the rally at Chamarajanagar at 11 am and at Mysuru at 3 pm.

Pointing out that the rally in Mysuru will take place at P. Kalingarao Open Auditorium in Dasara Exhibition premises, she said that more than 2,000 members of Gram Panchayats and Urban Local Bodies will be taking part in the convention at Mysuru.

Noting that State Ministers and other Central BJP leaders of the State will be taking part in the convention, Mangala Somashekar said that the Janaswaraj convention will be held in all the four revenue divisions of the State (Mysuru, Bengaluru, Belagavi and Kalaburagi).

Noting that Rural Development and Panchayat Raj (RDPR) Minister K.S. Eshwarappa will inaugurate the rally at Mysuru at 3 pm tomorrow, she said that  earlier, the Minister will also inaugurate a similar rally at Chamarajanagar at 11 am.

Maintaining that the BJP was fully prepared for facing the polls, she said that both the Union and State Governments have come up with several programmes for the empowerment of Gram Panchayats. There are over 2,500 BJP supported Gram Panchayat members in the district, she added.

Referring to the selection of the BJP candidate, Mangala Somashekar said that she herself too is an aspirant of the party ticket. Maintaining that six partymen, including herself have applied for the ticket from Mysuru-Chamarajanagar Constituency, she said that the party is likely to announce the candidates in a day or two. However, the selection of the candidate has been left to the discretion of Party High Command, she added.

BJP State spokesperson M.G. Mahesh said that the programmes, plans, projects, schemes, initiatives etc., of both the Union and State Governments will be highlighted during the conventions. City BJP President T.S. Srivatsa, leaders Devanur Pratap and Cable Mahesh were present at the press meet.

Setting in motion the BJP’s poll campaign for the MLC polls, Chief Minister Basavaraj Bommai launched the Yatra at Koppal in Kalyana Karnataka region on Thursday.

The BJP has formed four teams headed by former CM B.S. Yediyurappa, State BJP Chief Nalin Kumar Kateel, former Chief Minister Jagadish Shettar and RDPR Minister K.S. Eshwarappa heading one of the teams. Each team will have several State and Union  Ministers, MPs, party leaders and local leaders. The rally will go on for three days and the party has aimed to reach out to grass-root level party workers and evolve plans for the 2023 Assembly polls.