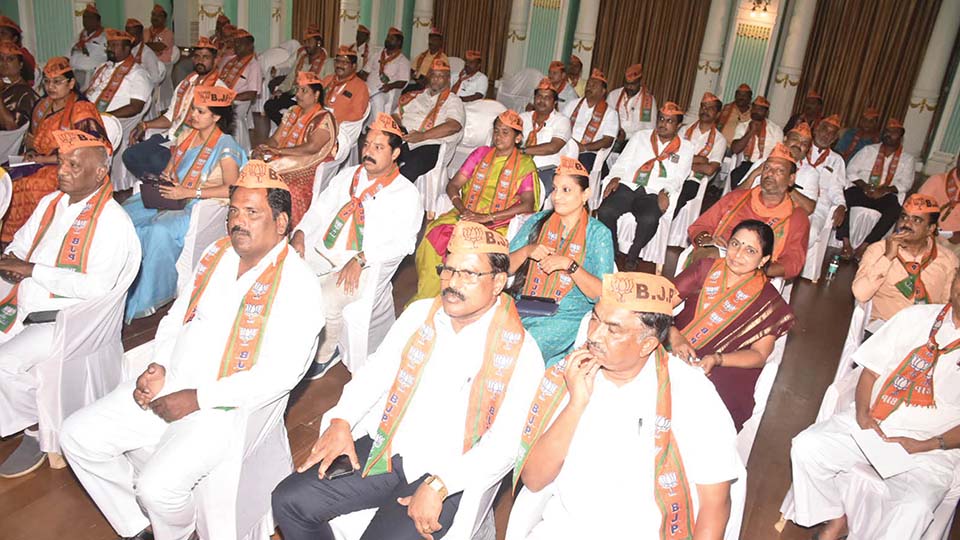 BJP must get 10 seats out of 11 in Mysuru: Nalin Kumar Kateel

Mysuru: BJP State President Nalin Kumar Kateel called upon party workers to set aside their differences and work for the party.

“We must strive to get 10 seats in Mysuru out of 11 and all party leaders and functionaries must forget their mutual differences and rivalries and work towards the victory of the candidate by a huge margin,” he said.

He was addressing a party workers’ meeting on Apr. 13, the concluding day of the organisational meeting with leaders and office-bearers of Mysuru, Mandya, Chamarajanagar and Hassan districts. He said that BJP was the only party with internal democracy and other parties are purely dynastic politics where family members get importance over party functionaries.

“Ours is the only party where leaders give importance to the sentiments of workers and agree to implement their suggestions. Other parties are run by families like feudal lords. Despite bad press and bad projection by Opposition parties on the Centre handling COVID crisis, people have reposed faith in the BJP and this has shut the mouths of the Opposition leaders. They criticised India’s vaccine innovation and called it a BJP vaccine. But when the           vaccine was approved globally, people like Siddharamaiah secretly took it by gaining back-door entry into Government Hospitals,” he ridiculed.

He asked partymen to give up groupism and work with unity in view of the challenge the BJP faced from its rivals in the Mysuru region. “I am sure that Mysuru, the land ruled by Wadiyars, will contribute to the BJP’s target of reaching 150 seats in the next Assembly elections. You all must strive to win at least 10 out of 11 seats in Mysuru district. People like Siddharamaiah do not know the value of Wadiyar rule and he addresses the Wadiyars in singular,” he said.

Lauding former CM B.S. Yediyurappa for taking up many development projects in the State, he called him a common man’s CM. He went on to say that CM Basavaraj Bommai, who succeeded Yediyurappa, was focused on fast-paced transformation of the State.