Sandesh Swamy, who came in a mammoth procession after performing puja at Huliyamma Temple in Kyathamanahalli, submitted his papers to Returning Officer (RO) R.K. Kantharaj at Chamundi Vihar Stadium.

BJP candidate from Chamaraja Constituency L. Nagendra after performing puja at Raghavendra Mutt on Narayana Shastri Road here was brought in a huge procession accompanied by hundreds of BJP activists. 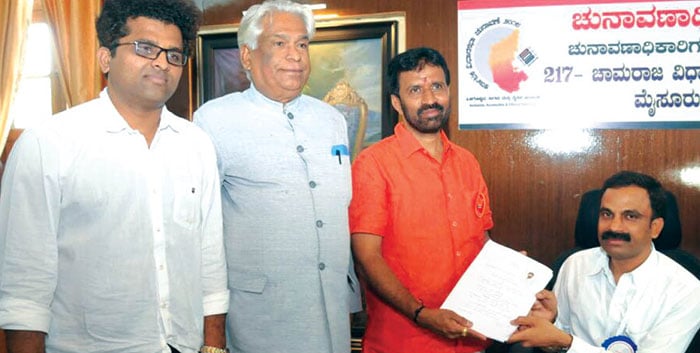 K. Harishgowda, who was denied the JD(S) ticket from Chamaraja Constituency filed his nomination papers as an  independent candidate this morning. Harishgowda after performing puja at Kote Anjaneyaswamy Temple, submitted his nomination paper at MCC office to RO K.H. Jagadish. His wife Gowri, mother Yashodamma and Basavaraj accompanied him. He too came in a huge procession along with many of his supporters.

MKS, Rangappa: Meanwhile, Congress MLA and candidate from K.R. Constituency M.K. Somashekar (MKS) and JD(S) candidate from Chamaraja Constituency Prof. K.S. Rangappa were on their way to their respective Returning Officer’s office to file their nominations when we went to the Press.

The filing of nomination will end tomorrow, following which the scrutiny of all nomination papers will take place on Apr. 25.

The last date for withdrawal of nomination is Apr. 27  (Friday). The State will go to the polls on May. 12.