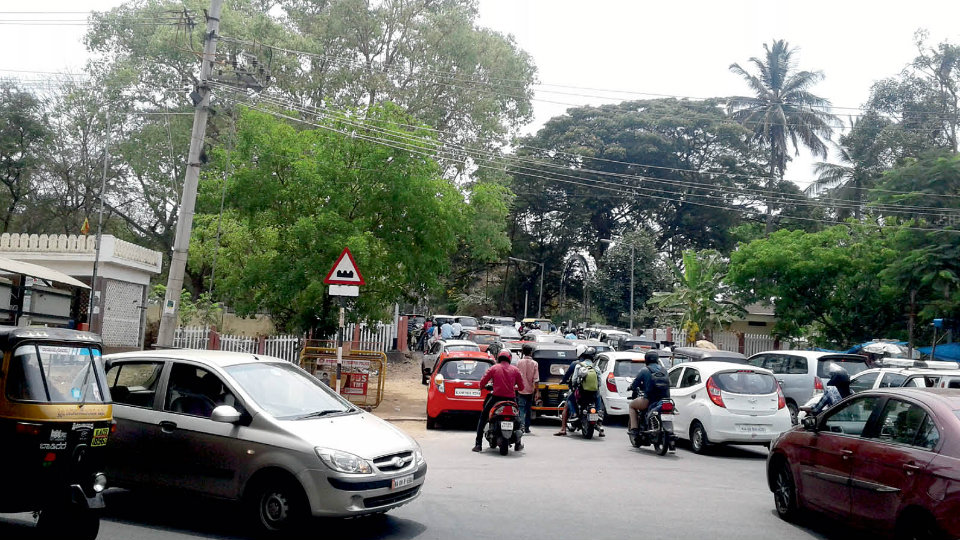 Mysuru: The Mysuru City Corporation (MCC) and the Railway Construction Unit of South Western Railway  (SWR) is jointly coming with a project to construct an under-bridge near the Crawford Hall manned level crossing on Radhakrishnan Avenue close to Kukkarahalli Lake. Once this under-bridge is constructed, it will ease the problems of motorists as they have to wait for a long time during the crossing of trains at this crossing.

The Railways has already invited the tender and the formalities of finalising it and choosing an agency is under process. The tender was called about three to four months ago and once it is finalised the work on the under-bridge is likely to commence in another two to three months, said sources in the Railways.

The estimated cost of the project is about Rs.32 crore, which includes the cost of constructing the under-bridge pegged at Rs.5 crore and the remaining Rs. 27crore works will be undertaken by the MCC for constructing approach roads.

The construction of the under-bridge near Crawford Hall is a challenge as it has many intersecting roads. H.R. Bapu Satyanarayana, Chief Engineer (Retd.), Ministry of Transport, speaking to SOM, said: “Since the alignment of the road from Kalamandira crosses near the vicinity of the proposed under-bridge and also the road in front of Crawford Hall crosses the approach road on eastern side, separate road bridges have to be provided to cross the approach roads.” According to Bapu Satyanarayana, the design of approach roads on either side of the bridge presents some logistic problems which would have to be overcome.

Confirming that the tender process has been started by the Railways and once the work begins they will come up with suitable drawings to execute the road works, MCC Superintending Engineer M.K. Bhaskar told SOM, “Once the tender process is completed, the Railways will start the work in another two to three months. We are ready with the basic plan. However, we cannot finalise it as we have to first see the drawings of the under-bridge of the Railways.” “In the Railway under-bridge a vertical clearance of 5.4 metres (17.6 ft.) has been provided. We have to plan for the service roads that lead to Kalamandira from Crawford Hall side. The gradient has been planned right from Cosmopolitan Club and it will go up to the new KPTCL office near Dhobi Ghat on Kukkarahalli Lake Road. That means a mini bridge could come up near Kautilya Circle (near Crawford Hall). Service roads have to be provided here too as the vehicles coming from either side of Crawford Hall, have to move towards Kukkarahalli Lake road that leads to Bogadi Road,” he said. “As the alignment of the road from Kalamandira crosses near the vicinity of the under-bridge and also the road in front of Crawford Hall crosses the approach on the eastern side, separate road bridges have to be provided to cross the approach roads. Since 17.6 ft  vertical clearance has been given, it would require excavation for nearly 20 ft below the rail level. The approach on the western side is in a rising gradient towards the bridge there would be some advantage in the height of the breast walls but even so it will be high in the immediate vicinity of the bridge. The breast wall has to run all along the approaches. The road level of Kantharaja Urs Road should be such as to allow vehicles coming on this road to enter approach road smoothly,” noted Bapu Satyanarayana.

Asked about the traffic approaching from Kantharaja Urs Road near Fire Brigade turning right to Crawford Hall side, Bhaskar said that these are a few challenges they have to work with and they were planning for service roads on either side.

“The road level of Kantharaja Urs road should be such as to allow vehicles coming on this road to enter approach road smoothly. This is crucial as Fire Brigade  building is located on this road and in case of emergency it should allow the movement of the vehicle on this road. Next to the huge tree in the approach there is a lane where some houses are situated and they have to be given access. The compound of Crawford Hall will be affected. Since traffic on this road is already heavy it would be necessary to widen the bridge for four lanes and I was informed that Railways can take it up at short notice. In fact, the Bogadi road is already four lanes beyond Kukkarahalli bridge and carries heavy traffic already. Of course, when the bridge is extended to four lanes, a whole range of  problems have to be encountered. Wisdom lies in investing thought on this issue at this time itself,” said Bapu Sathyanarayana. “Once the Railways complete the under-bridge construction, which could take about six months to a year, we will complete the road work at a brisk pace and the whole project will be completed in 18 months,” said Bhaskar.