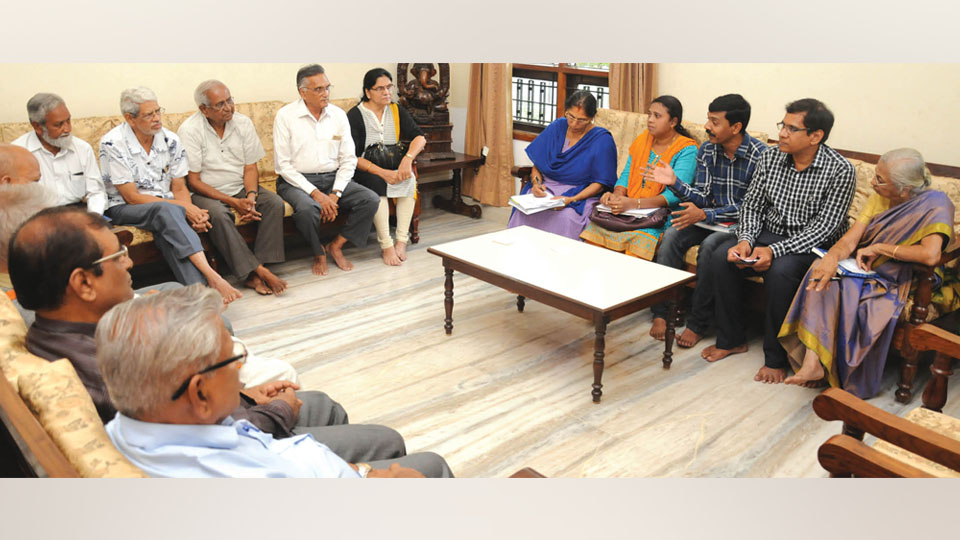 Mysuru: A meeting of the public with revenue officials of Mysuru City Corporation (MCC) was held last evening at the office of Mysore Grahakara Parishat (MGP). Assistant Revenue officers Kumara Swamy, Arasu Kumari and Prasad attended the meeting and answered the questions that were raised by the citizens.

At the meeting, the MCC officials clarified on issues raised by apartment owners and penalty for not having Completion Report (CR) and violating the building by-laws. According to Bhamy V. Shenoy of MGP, the MCC had wrongly interpreted that penalty to be imposed was equal to the taxes to be paid and only when clarification was sought from Urban Development Ministry, it was clarified that any building (commercial or residential) has to pay as penalty two times the tax to be paid.

Apartment owners have to pay not only for the plinth area of their apartment, but also for any common built up area (but excluding vacant land which may be used for parking), he said.

Participants wanted clarity on the indiscriminate collection of tax on common areas apart from the carpet area of apartments, to which Revenue Officer Prasanna replied that the issue has come to the notice of the higher officials and such a provision is not prescribed in the rule book. There is no need to pay the same and such additional payments that are already collected will be adjusted in the future payment of taxes, he said.  Prasanna also assured that the public will be informed about the same through an official notification soon.

The meeting was a platform for the public to highlight the failure of MCC to modernise and digitise property tax collection.

Though many services of the MCC have been modernised and are now available online, payment of property tax continues to be archaic in its present form.

Bhamy Shenoy told the meeting that when he was the honorary adviser to the Mysuru City Corporation in 1989, he had insisted on computerisation of property tax system but the system has not been implemented and has remained primitive even in 2018, giving a lot of scope for human errors.

When a question was asked if the MCC had attempted to estimate the potential revenues that can be collected from property tax and if there was any efficient system, there was no response from the officers.

Questions were also raised on beggary, and library cess. Even here, the officials did not have ready response. It became evident that more than Rs. 10 crore collected in the form of library cess during the last few years has not been handed over to the library authorities.

MGP office-bearers and members S. Shobana, R. Chandraprakash and others were present at the meeting.