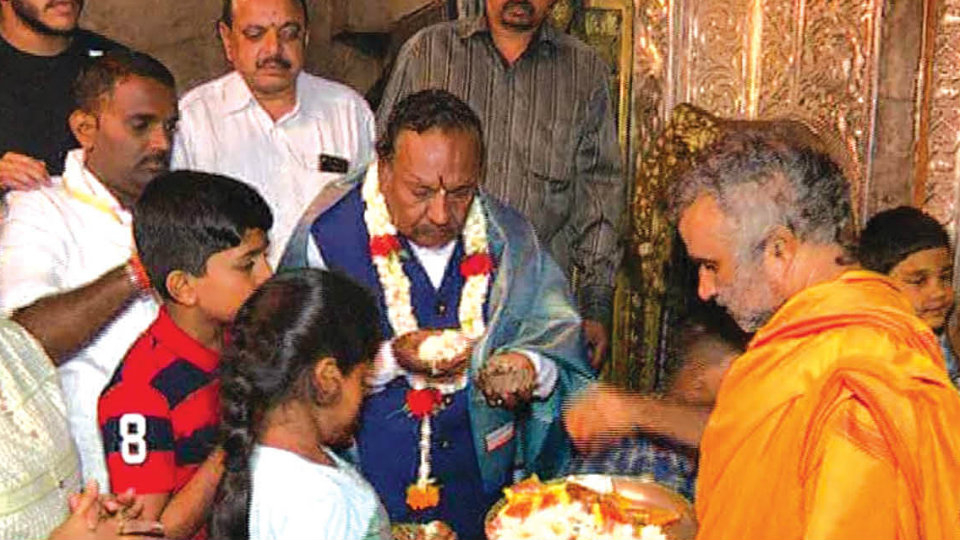 Mysuru:  Senior BJP leader and Shivamogga MLA K.S. Eshwarappa celebrated his 70th birthday by performing special puja at Srikanteshwaraswamy temple in the temple town of Nanjangud in the district yesterday.

Eshwarappa, who had arrived along with his family members at Nanjangud on Saturday, stayed overnight in the town for celebrating the special occasion.

Eshwarappa, who first visited Dattatreya temple in the town, performed ‘Chandika Yaaga’ in the temples following which he visited Lord Srikanteshwaraswamy temple and offered prayers to the deity.

Thereafter, Eshwarappa, continuing his temple run to mark his 70th birthday, visited Chamundeshwari temple atop Chamundi Hill in Mysuru and had darshan of the Goddess.

Even as Eshwarappa arrived at Chamundi Hill, thousands of supporters from his home town of Shivamogga, who came to the city in over 70 buses, made a beeline to Chamundi Hill. As all the buses came together, there was traffic jam on the road leading to the hill temple (see pic).

Eshwarappa also cut a cake at the foot of Chamundi Hill in the presence of his supporters and members of the public.

While some of his supporters garlanded him, a few others presented him a sword, that resembled the sword of martyred freedom fighter Sangolli Rayanna. City BJP President Dr. B.H. Manjunath, leaders Jogi Manju, Kurubarahalli Ramesh and others were present.

Speaking to press persons atop Chamundi Hill after having darshan of the deity, Eshwarappa claimed that many Congress MLAs were in touch with him.

Accusing the Congress and JD(S) of entering into an unholy alliance, Eshwarappa maintained that the coalition Government would not last long and would fall under its own weight.

Lashing out at the Congress for its abject surrender to the JD(S), stating that many Congress legislators were unhappy with the alliance, Eshwarappa  said that the Congressmen were themselves engaged in making Karnataka Congress-free and it was only a matter of time that the coalition Government collapsed.