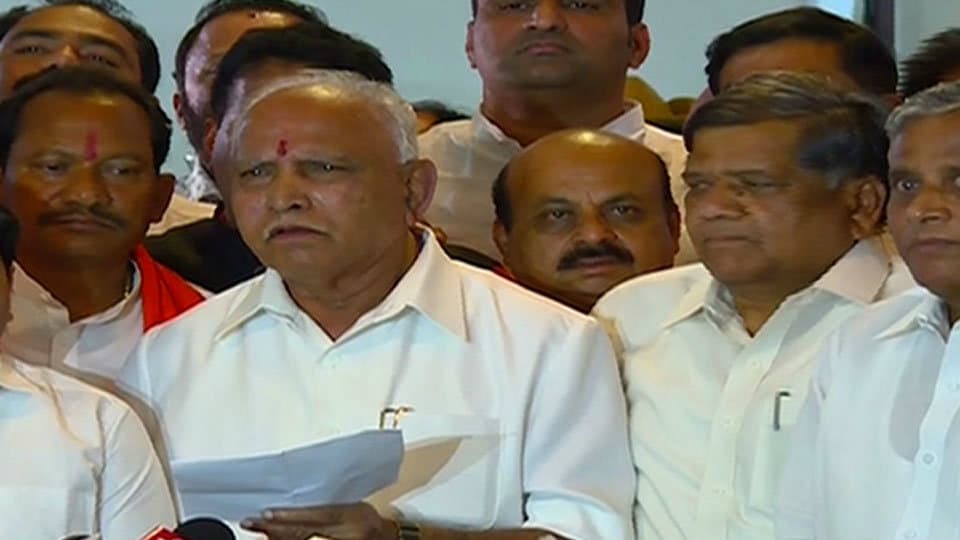 BJP poised to bounce back to power after six years

Bengaluru: The Bharatiya Janata Party (BJP), which made its first advent in Karnataka to form its own Government in 2008, is poised to return to power in the next few days. This comes in the wake of JD(S)-Congress coalition losing the Floor Test.

The BJP, which made its advent in the South and the East, had considered Karnataka as the gateway for its entry into the elusive South India, will come back to power after a gap of six years in Karnataka.

The BJP, which had emerged as the single largest party in the 2008 Assembly elections by bagging 110 seats, three short of majority had formed the Government on its own by securing the support of the five independents, led by senior leader B.S. Yeddyurappa.

However, Yeddyurappa had to step down following corruption charges in the alleged illegal denotification of revenue land, in 2010, in which the beleaguered Yeddyurappa had also served a judicial custody of over 23 days. Senior BJP leader D.V. Sadananda Gowda, who had taken the reigns from Yeddyurappa, also had to resign following dissident activities in the party, and elected another senior leader in the party Jagadish Shettar as the new CM.

Thereafter, the BJP suffered defeat in the 2013 Assembly elections, when the party was divided by Yeddyurappa and formed his own new party Karnataka Janata Party (KJP).

However, the resurgent Saffron party, with Yeddyurappa back in the fold under the influence of Prime Minister Narendra Modi, emerged to become the single largest party in the 2018 Assembly elections. But it fell short by a whisker winning 104 seats, short of the 113 simple majority mark, and sat in the Opposition.

Again the BJP oozed in confidence under Narendra Modi wave winning 25 out of 28 seats in the Lok Sabha elections and an independent in Mandya supported by it also won. It was such a morale-booster for the Saffron party even as the Coalition Government in Karnataka suffered under differences among the Coalition party partners.

The clock has turned a full circle now after the teetering coalition Government fell last evening and again Yeddyurappa is likely to assume the mantle.