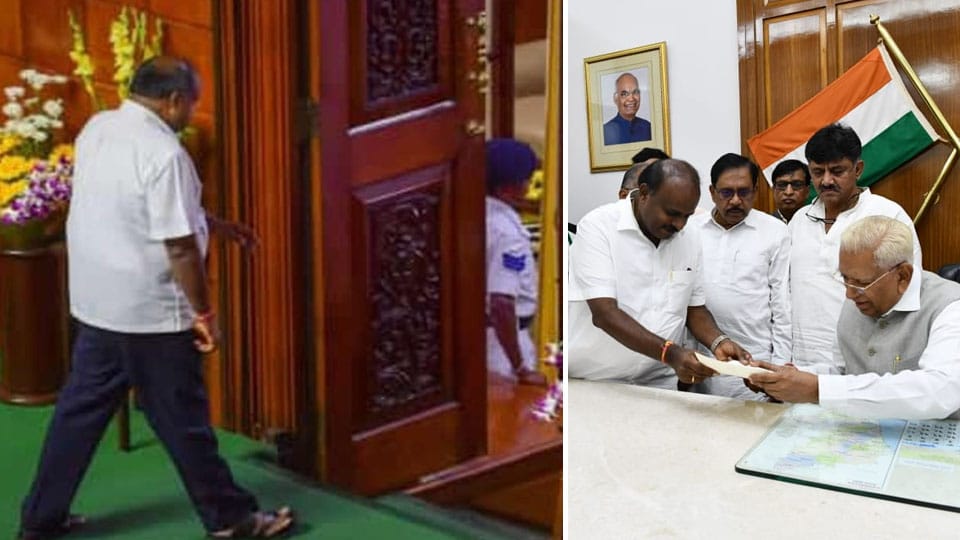 Bengaluru: The inevitable finally happened last evening, with the H.D. Kumaraswamy Government falling after days of political manoeuvring and attempts to win over the rebel Legislators failed to bear fruit.  The JD(S)-Congress Coalition Government fell 12 days after Kumaraswamy sought to move the confidence motion in the State Assembly.

The Trust Vote was defeated last evening, the fourth day when the House debated on the confidence motion, bringing an end to the high-voltage intense power struggle. The motion was defeated with 99 members voting for the motion and 105 against it.

It was indeed a grand ‘Nataka’. Ever since the 15 MLAs resigned from the ruling camp, the fall of the Government was imminent. The defection gave BJP a massive upper hand in an intricate game, whereas Congress and JD(S) were left to scamper for shelter and protection from a looming threat. A floor test battle ensued where HDK-led Coalition failed to prove majority.

Exactly 14 months ago on May 23, 2018, Kumaraswamy had assumed office with great fanfare. The Congress, after losing the elections badly (down from 122 to 80 in a 224-member Assembly) supported the JD(S), which had also come down from 40 to 37 to deny the BJP (up from 44 to 104 seats) an opportunity to lead the Government.

Interestingly, Kumaraswamy was sworn-in as CM on May 23 in 2018 and he lost power on July 23, 2019. His son, Nikhil Kumaraswamy in support of whom the entire coalition machinery rallied around, lost the 2019 Lok Sabha elections on May 23 against Independent candidate Sumalatha Ambarish. Nikhil’s loss was a blow to    Kumaraswamy who failed to see a wave against his Coalition set-up. He, in turn, blamed the media for extensive coverage of Sumalatha and Narendra Modi.

READ ALSO  In Dance of Democracy, Mandya is Super Star

Even last evening, after losing the Trust Vote, Kumaraswamy ‘thanked’ the media for supporting him during his 14-month rule. The dripping sarcasm in his voice was, however, there for everyone to see.

Though Kumaraswamy may have blamed the BJP for whatever has happened since July 1 when two Congress MLAs first revolted, but the fact remains that right after assuming office he knew that his Government was full of internal contradictions and his term would be up in about a year’s time.

Over a fortnight, Kumaraswamy had been trying to cling to power, using all kinds of tricks to delay the confidence vote, notwithstanding the fact that it was he who had demanded it. Around 20 MLAs including those from Congress, JD(S), Independents and BSP who had been supporting the Coalition Government had deserted — 16 resigned and four abstaining on one pretext or another.

It was clear that for the past fortnight he didn’t have the numbers. His Government had been reduced to a minority, but till such time it was proved on the floor of the House, he could stay put on the CM’s chair. It’s a different matter that the drama had made a mockery of the Parliamentary process, all in the name of the Speaker, who is the supreme authority when it comes to the matters of Assembly.

Never had the mandate

Kumaraswamy never had the mandate to rule Karnataka. He was the leader of a party which was number three in the State Assembly. Besides, JD(S) number had also gone down in the Lok Sabha elections.

The Congress had lost almost half of its seats, from a position where it ruled the State with an absolute majority. In this year’s Parliamentary elections, the BJP swept the polls conclusively defeating the JD(S)-Congress alliance, so much so that even former Prime Minister and party patriarch H.D. Deve Gowda and his grandson Nikhil Kumaraswamy lost the elections.

The Parliamentary poll results were a further affirmation that Congress-JD(S) combine didn’t have the mandate to rule the State. Under the circumstances, it was understandable that so many of Coalition MLAs raised a banner of revolt.

Repeatedly pilloried over his stay in a five-star hotel, Chief Minister H.D. Kumaraswamy on the other hand claimed yesterday that it had brought him luck. Kumaraswamy said he was sitting in the same room in May 2018 and tracking the results of Assembly elections when he received a call that changed his political trajectory.

“Seeing the outcome (at first), I decided to quit politics. Just then, I got a call from AICC General Secretary Ghulam Nabi Azad. He said the Congress had decided to support the JD(S) and wanted me to become the Chief Minister,” he said. “This room turned out to be lucky for me, hence I retained it.”