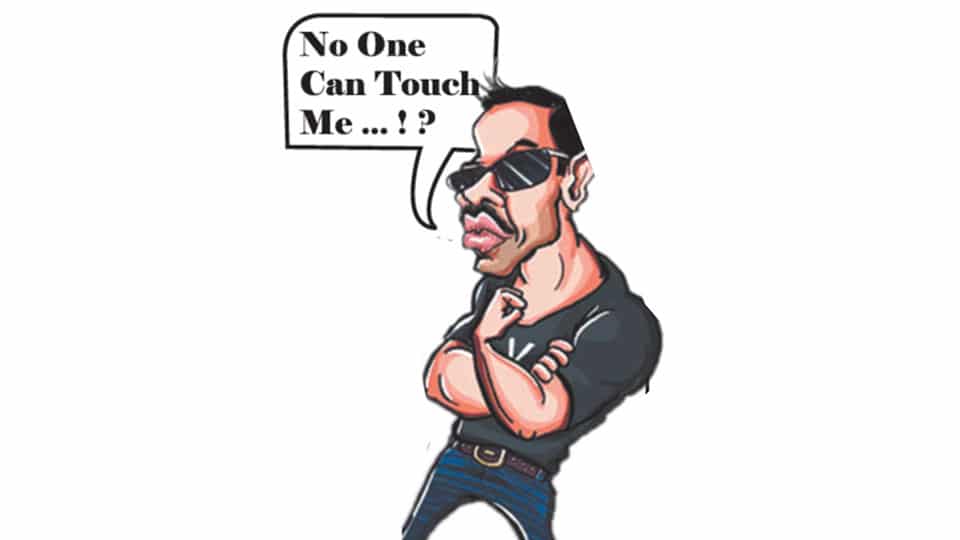 BJP, put Vadra in Jail or Shut Up !

The BJP wants to have a ‘Congress-mukt Bharat’ but isn’t a ‘Corruption-mukt Bharat’ more important? What is BJP doing about that? Case in point Robert Vadra.

We all remember how when in 2012 news broke that Vadra’s Skylight Hospitality Pvt. Ltd., had acquired properties with interest-free loans from DLF and IAS Officer Ashok Khemka was transferred for stopping Vadra’s lands sale deed process, BJP roared ‘Congress-corruption’ and milked all of it for elections.

But now that they have been elected to power, what action have they taken? Oh! They did take action — they transferred Ashok Khemka to Archaeology and Museums Department! As for Vadra, well, there has not been any independent enquiry by the Enforcement Directorate or CBI.

All this pussyfooting around Vadra scandal makes us wonder is Arvind Kejriwal right when he says, “I feel both the parties have a husband-wife kind of a relationship. They know each other’s secrets.” So, is there a tacit understanding between the two national parties to protect each other’s corruption?

Let’s not forget while we talk of the recent Vadra case where a Defence dealer Sanjay Bhandari is being investigated for allegedly buying a benami house for Robert Vadra in London, the same Bhandari had 355 phone conversations with Appa Rao, the Officer On Special Duty to the BJP Aviation Minister Ashok Gajapathi Raju. The same defence dealer also seems to have close connection to senior BJP leader Sidharth Nath Singh!

Even in the case of 2G-spectrum scam while BJP vilifies Dr. Manmohan Singh and A. Raja, it was senior BJP leader during NDA, who gave Niira Radia, the middle-woman in 2G scam, her first entry into the corridors of power. In fact, criminal lawyers R.K. Anand, in his book “Close Encounters with Niira Radia” writes, “When she met Ananth Kumar, both of them needed each other. So both benefited from each other. Both of them were very close.” And adds saying that once when he visited Radia’s farmhouse he was surprised to see her “dancing closely with NDA Minister Ananth Kumar to Western ballroom music!”

Also BJP-Congress public ‘spats’ seem like a drama to fool us. Remember in September 2015 when Smriti Irani said Rajiv Gandhi Charitable Trust had grabbed farmers’ land in Amethi and the Congress promptly sent her a notice, after which she roared “If Rahul or Congress have the courage let them put me behind bars.” What happened after that? Nothing. Smriti’s government, which was, and is in power, did not prove what she accused the Gandhis of and Congress did not take the case against Smriti to its logical end.

Similarly, just a few months later in November 2015 after Dr. Subramanian Swamy brought up Rahul’s ‘British Citizen’ theory, just like Smriti Irani, Rahul said, “Different kinds of allegations are levelled against me. Modiji, it is your government. You have the agencies. Get a probe done against me and send me behind bars if you find something.” What happened after this…nothing?!

Also, while BJP accuses Congress of corruption what was the BJP doing sitting in the Opposition? The ONLY job of the Opposition is to keep an eye on the ruling party? So what was BJP doing during all those ‘corrupt’ years of Congress, were they blind and deaf? Because, every one of the big scandals was brought to the public by the media or by RTI activists; BJP simply hijacked it or piggy-backed on it, be it the Jan Lokpal movement, be it the 2G scam, be it the Common Wealth Games scam or the Vadra scandal. Even the National Herald case, which involves the Gandhis, is a personal one being fought by Dr. Subramanian Swamy and not by BJP.

Of course, Dr. Swamy has been after the Gandhis for a very long time, but what has come out of it? Nothing is proved, except he has stayed in the news. After all, the same man called Sonia Gandhi a ‘Great Lady’ and compared her to Goddess ‘Laxmi’ when he took her help to bring down the Vajpayee government. So far Dr. Swamy has just been a tease, tickling our disdain for the Gandhi family. Is BJP doing the same?

If the Gandhis are corrupt like the BJP has been saying for decades, then prove it and put them behind bars. It shouldn’t be too hard since BJP is in power. So why then is the BJP dilly-dallying?

Even when it comes to dynastic politics, which the BJP keeps accusing the Congress of, for every Rahul Gandhi there is a Varun Gandhi, for every Jyotiraditya Scindia there is a Pankaja Munde, for every Sachin Pilot there is an Anurag Thakur, it goes on…Oh! And for every Karti Chidambaram there is a Dushyant Singh. So how are these two parties different? Is a non-Delhi Modi and a few non-Lutyens Ministers the only difference? Well, it seems so.

For now, the Prime Minster may be putting us on the world map but it’s time for some domestic action such as putting the corrupt behind bars, starting with Vadra… Unless BJP is scared to send the Gandhis to jail, lest it backfires like it happened post-Emergency when Indira Gandhi was jailed and sympathy brought her back to power. But hell…no one gives a damn about Vadra, even the Congress might be happy to get rid of him; so go ahead BJP, show us your bark is as good as your bite, else stop using Vadra or the Gandhis as election bait.