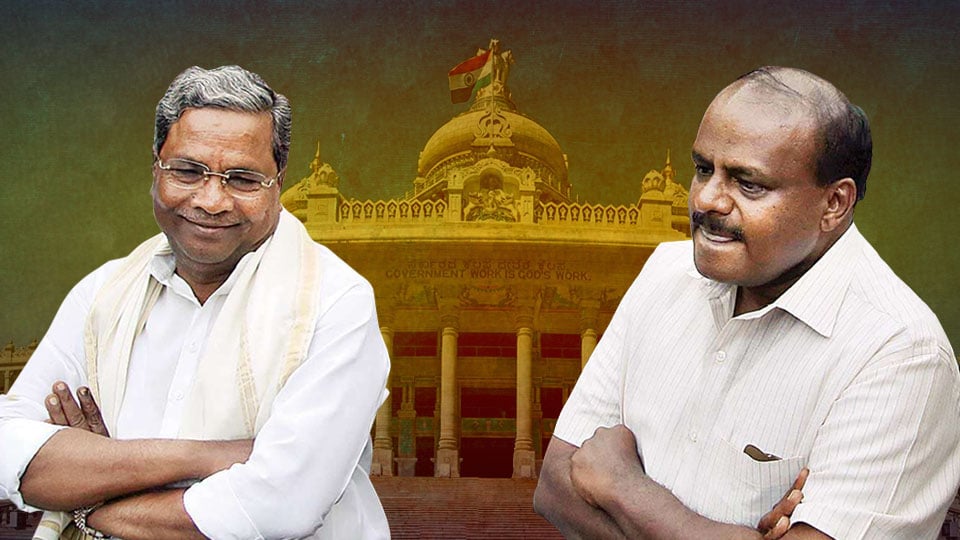 Bengaluru:  The BJP recorded its biggest victory in Karnataka, the only Southern State it has ever breached, registering victory in 25 of Karnataka’s 28 Lok Sabha seats. The party crossed its previous high of 19 seats registered in 2009. In the 2014 polls, the BJP won 17 of the 28 Lok Sabha seats. The BJP juggernaut inflicted defeats on Congress-JD(S) big guns such as H.D. Deve Gowda, Mallikarjun Kharge, Veerappa Moily and K.H. Muniyappa.

In 2014, Karnataka joined the national bandwagon to vote for Narendra Modi. And 2019 has seen full integration, with the saffron party sweeping the State with very narrow margins in Chamarajanagar (where the Congress’s Dalit strongman R Dhruvanarayan lost to his former mentor V. Sreenivasa Prasad).

The one-year old JD(S)-Congress regime has moved closer to uncertainty after the two parties suffered a humiliating defeat. An embattled Congress and JD(S) are holding on to each other tightly with their respective leadership determined to save the regime at any cost.

Congress Legislature Party (CLP) chief Siddharamaiah has dismissed any immediate threat to the government from the BJP’s win. The State BJP too, sources said, has decided not to make hasty moves to dislodge the government. The BJP will instead wait for the new Ministry to assume office at the Centre, before setting the ball rolling.

It is said that sections of the JD(S) and Congress MLAs are ready to switch over to the BJP camp, recognising its surging political stock with voters. Once the coalition regime is reduced to a minority, the BJP will stake its claim to form the government. Chief Minister H.D. Kumaraswamy is battling hard times on personal front too with both his father Deve Gowda and son Nikhil defeated

This is the worst-ever result for the Congress in Karnataka. Infighting among the leaders and Congress Legislature Party leader Siddharamaiah’s failure to take everyone together resulted in the party registering its biggest defeat, sources said.

Describing the massive victory of the BJP as “historic” and “unprecedented”, party State President B.S. Yeddyurappa lashed out at the Congress and demanded an apology from former Chief Minister Siddharamaiah for his remarks that he would prevent the saffron party from touching a double-digit tally. “Both Siddharamaiah and AICC President Rahul Gandhi insulted BJP by making arrogant statements during their campaign. They must tender a public apology,” Yeddyurappa said. He attributed the party’s performance to the Narendra Modi wave, lack of co-ordination between the ruling coalition partners and maladministration by the coalition government.